Mrs Favour discussing a point with some of her apprentices

For Mrs. Favour Okonkwo, a female automobile mechanic in Abuja, practicing her profession is a dream come true, having nursed the interest way back in secondary school as a teenager. Denigrating comments by people about mechanics did not discourage or make her change her mind. She, however, ended up marrying an auto mechanic too, whom she said has given her all the encouragement and wherewithal she needs to excel in her profession.

A native of Awka in Anambra State and mother of six, Madam Rock of ages, as she’s fondly called, said her journey started at the Government Technical College Awka. “That was where I developed the passion for this work. I later met the love of my life who coincidentally is also an auto mechanic, so with the experience I gathered from school, we joined forces and set up this business.

Madam Favour said she also acquired addition knowledge in Auto mechatronic from some institutions thereafter, and has attended many workshops through which she further expanded her horizon.

“We started the work in Onitsha, and later relocated to Abuja in 2010. I used to work even when pregnant, although it is not easy. I try to do what I can afford to, and leave the rest for others. 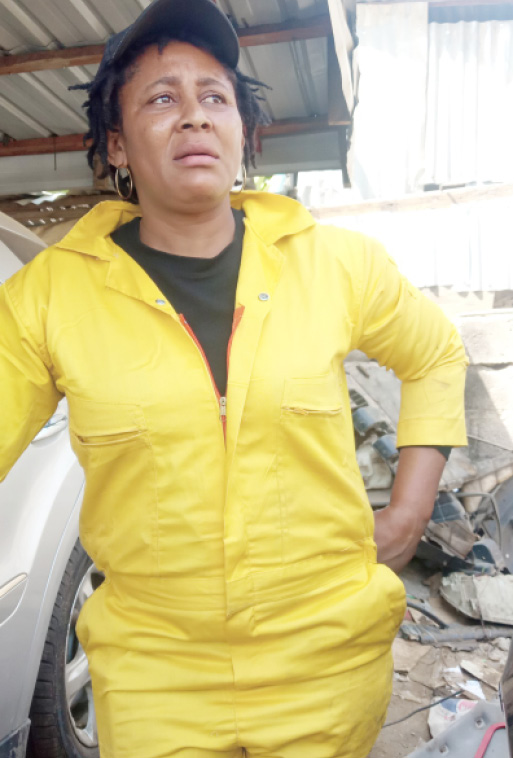 On how she combines her profession and the home front, she said everything is about planning. “There’s a popular saying that when you fail to plan, definitely you are planning to fail. So, when you plan your life very well, things naturally fall in place.”

She also noted that in the course of doing business, she passes through many challenges, especially inability to attend to her customers promptly sometimes.

“But those that understand would patiently wait for me to sort out my family issues, then attend to them. There are also issues of those that would attempt to discourage you. Some people would openly challenge me on why, as a woman, I would venture into a field dominated by men, while others would even say, ‘as beautiful as she is, why did she choose this profession’, and things like that.

“But that has never discouraged me, because I had already made my mind about it. To me, the essence of living is to meet your need, that of immediate and extended family, and so far, God has been faithful,” she explained.

Madam Favour said she had trained two girls in the profession and currently has four trainees. Daily Trust Saturday also leant that five males are working with her husband who shares the same workshop with her.

Speaking about her children, she said she can’t wait for them to develop interest in the profession. “Even if they would not strictly choose the profession, but any knowledge or skill they acquire here would help them in future. I have mostly female children, and during the lockdown, all of them were here. If you see them on the job, you would mistake them for professional engineers. They’ve gone back to school; some of them are in boarding school, while others go from home.”

Talking about successes recorded so far, Madam Favour said, “As an average Nigerian, I don’t beg anybody for food, and I don’t struggle to pay my bills. If I need anything, I would just look for it, at least at my own level. I pay my apprentices, at least a little amount to take care of themselves like for feeding. I also take care of my children, especially their education. To me, these are great achievements.” 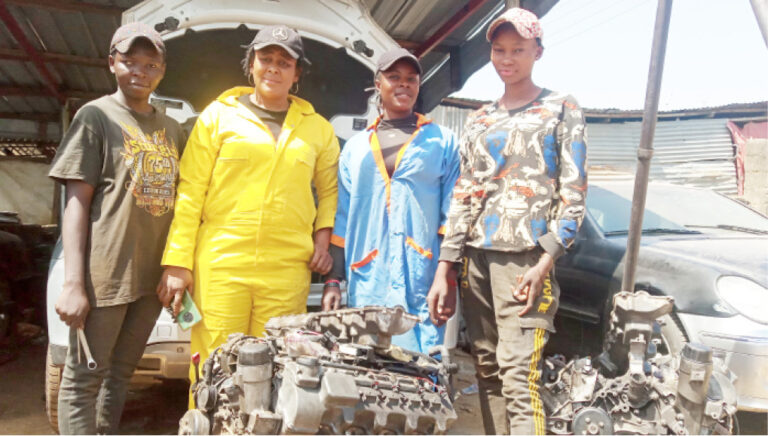 One of her apprentices, Victoria John, 18, said she has been yearning to train as an auto mechanic. She stopped school at JSS 3, but added that she would go back for her studies in future. The teenage mechanic apprentice said though she hasn’t spent more than a year in the garage, she is now able to handle many things, and she aspires to be like her madam one day.

Husband of the woman mechanic, Mr. Valentine Okonkwo, said they specialize in and handle mostly German made vehicles such as Mercedes, Audi, BMW, Volkswagen and so on.

Speaking on why he allowed his wife to join him in the profession, and went ahead to accommodate other ladies under her supervision, Mr Okonkwo said “To me what a man can do a woman too can do it, if not even better. People always want to stereotype women but the world has advanced beyond that today.

“Women should be encouraged to do what they love in order to fend for themselves, and in case of any eventuality they would not be stranded.”

Mr. Okonkwo said he is planning to relocate to a newly acquired site at nearby Tungan-Maje town, which according to him is bigger and more accommodating.

“And I also look forward to acquiring more working tools such as lifters, auto diagnoses, alignments and tyre removal tools, among others, to boost our business.”