The renowned footballer reportedly suffered cardiac arrest and died at the age of 60 on Wednesday. 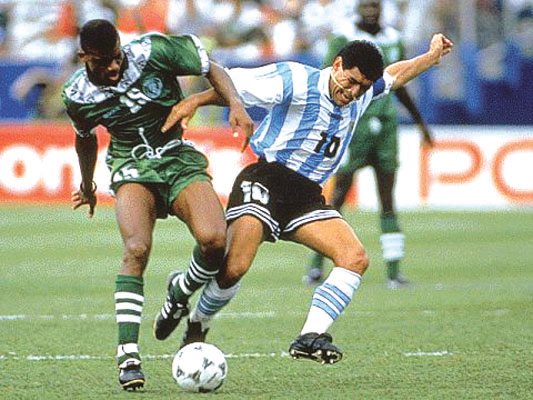 Sunday Oliseh, the former Super Eagles captain and coach has reacted to the death of football legend, Diego Maradona.

Oliseh said he has nothing but fond memories as the football world continues to  mourn the demise of  legendary Diego Maradona.

The renowned  footballer   reportedly suffered cardiac  arrest and died at age 60 on Wednesday   but Oliseh who held the midfield for Nigeria in the historic Group D USA’94 World Cup tie against Argentina, said Maradona was undoubtedly  one of the best players ever seen on planet football.

“Going to the USA’94 World Cup, the impression we had was that we were to play against the best players though  I don’t really know the level of competition, I knew it was going to be hard,” the former Juventus playmaker told NationSport.

He continued: “Of course, we knew what Maradona had done in the past but he was unbelievably exceptional playing against him;  his touches were too perfect like and it was as if he was massaging and caressing the ball.”

Oliseh confessed the Super Eagles resorted to some aggression in order to curtail Maradona who was leading the Argentina’s orchestra in that encounter that ended 2-1 in favour of the South Americans.

“At that point in my career, I’d grown up with the mentality that everything is possible if you fight for it but I’ll confess the first few minutes was difficult to mark  Maradona,” Oliseh recalled.“ But we had to change tactics and became a bit tighter on him but even at that, Maradona still showed his class.”

“ They both played  in different generations  but it’s not easy to have won the World Cup three times and that is why I always tend towards  Pele.

Imagine the out pouring of grief and mourning since he died, Maradona gave me the belief that one must think about what he can do for his country,” noted Oliseh who is a star of Nigeria’s golden generation of the 1990s.