Nomyange, who was married and in his 40s, was said to have done that because his lover, Ms Shininenge Pam, had rejected his marriage proposal after he had sent his wife and two kids away because of her. 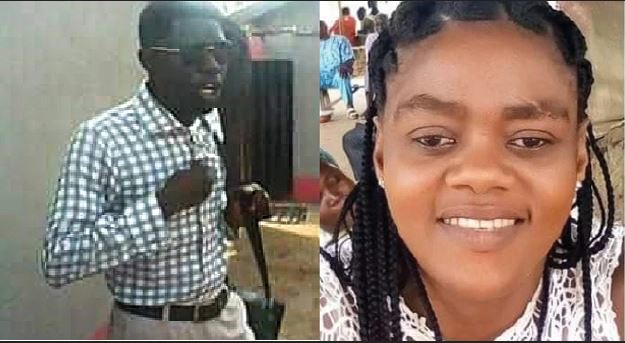 The PUNCH revisits the tragic story of a married man who set his lover ablaze in Benue state.

John Charles writes on the painful death of a young woman, Shininenge Pam, set ablaze by her jealous lover. Nicodemus Nomyange, who set her ablaze, also burnt himself in the process after she reportedly rejected his marriage proposal, in Makurdi, Benue State

The last few days have brought unprecedented attention to Inikpi Street in High Level, Makurdi, the capital of Benue State. News of how a jealous lover named Nicodemus Nomyange, set himself and his lover ablaze in an apartment which he had got for the lady had spread across the country and drawn media attention to the area.

Nomyange, who was married and in his 40s, was said to have done that because his lover, Ms Shininenge Pam, had rejected his marriage proposal after he had sent his wife and two kids away because of her.

The house is an old structure painted yellow, but faded to reveal patches of grey and accumulated grime, suggesting it has seen better days. It is Brazillian-styled (Face me-I face you, also called civilian barracks) with about 15 rooms. An unpleasant wave of stench welcomed visitors to the building extension from the only route leading to the apartment of the late Pam, who was said to be in her 30s. She and her lover, Nicodemus, died in a fire incident last Saturday.

The lovebirds, according to neighbours, were often seen together looking like a happy couple.

“They were always together; her place of work was a stone’s throw away from her lover’s place of work. Once Pam closed for work at Lobi Hospital (where she worked), she would go to the Millennium Guest House where Nicodemus worked as manager,” one of Pam’s neighbours said.

How Nicodemus sent his wife, children packing over Pam

According to Teryima Achaku, who works as a security guard at Millennium Guest House, where Nicodemus was a manager, his boss’ deadly action was ‘unexpected’.

He said, “He was my boss here and we were together throughout Friday night till that Saturday when he set himself and Pam ablaze. We did not know he was planning to end his life.

“We both slept over at the hotel till Saturday and when I woke up, I told him I was going home and would resume by noon and he said he would stay back till I returned.

“When I came back around noon, he asked us (three colleagues, including Achaku) if we remembered an incident at Vandeikiya Street in Makurdi here few years ago where a woman killed her children, husband and herself. And we all said we remembered. Then, he went to the generator room, took 10 litre keg that we normally use to buy petrol and left.

“It was after the incident that it occurred to me that he had passed some message across. Another strange thing I remember is that less than a month ago, he and I attended a funeral in his village. On getting there, he drove his wife and two kids away from his father’s house before returning to Makurdi.”

Corroborating Achaku’s story, Pam’s neighbour, who identified herself as Sunny Pawa, said, “Before the incident, we learned that the man went to his village during his father’s burial and drove his wife and kids away.

“The two lovers had been having misunderstandings lately; it might have to do with his proposal that was rejected by Pam. The lady told him that she could not marry a married man. The issue was known to some leaders in this area and they intervened and urged the man to accept the position of the lady.

“It was after the intervention that he left for his village and drove away his wife and kids. I think he did that to prove to the lady that he was serious about marrying her. But the lady insisted that she could not marry a family man and even showed him the picture of the man she wanted to marry.”

According to Nicodemus’ nephew, who only identified himself as Kelvin, he was with his uncle a couple of hours before his death.

“He called me and said I should come and be with him. He gave me some clothes to wash for him. It is true my uncle had a wife and two children in the village,” he said.

When asked if he knew his late uncle was dating Pam, Kelvin confirmed it, saying the couple were always together and had been dating for long.

“Even on the day they died, the lady came here after she left her workplace. They chatted as usual and she left. He behaved normally and did not show any sign that he was going to do something like that afterwards. But I remember that he picked a key from the generator house, gave me one of his mobile phones and told me the password to access it.

“Later, we left for the house and ate together. Then he said he was going out and would return later. He left with a keg,” Kelvin added.

At Pam’s place of work, Lobi Hospital, one of her co-workers, Nancy Orave, described her as a very lovely person who was loved by many people.

“She was a good person; she worked as a nurse here. She worked day shift on the day she was killed so she left the hospital around 1:30 pm,” she said.

Orave’s mood, however, suddenly changed the moment she was asked about Nicodemus, suggesting a strong dislike for the man who caused the death of her colleague.

Neighbours who were around at the time of the tragic incident painted a gory picture, which they said would not leave them for many years.

For instance, Pawa said he had just returned from work and was planning to prepare a sumptuous meal for himself, only to be greeted by a loud noise from Pam’s room. She was calling him and another neighbour (Andy) to come to her rescue.

He said, “It happened around 5pm on Saturday. I had just returned from work and I only saw one neighbour, Andy, in the compound. My neighbour said he saw when Nicodemus came in with fuel.

“But we didn’t suspect anything since the man was a regular visitor here. They were in a relationship and he often spent time with the lady. But when he came on Saturday, Pam was not around. She worked at a private hospital while the man worked at a guest house around here.

“We later gathered that he had asked her to go home to prepare food for him. So the lady came home and started cooking yam. Then she decided to go and buy some okra to prepare soup. It was during that period that the man came in. He called Pam on the phone to find out where she was and asked her to come back.

“Pam did not get the okra so she asked a neighbour to help her get it so she could return home. As she entered her room, there was no sign of an argument between them but I heard that later the lady called on our neighbour who was around, saying, ‘Andy, come, come, come’.

“It was when her voice became louder that we both ran into her room but the burglary proof at the entrance prevented us from gaining access to her room. It was while we were trying to force the burglary proof open that the man struck some matches and we heard an explosion. The impact threw Andy, who was in front of me, off his feet. It threw him some metres away and he was hit against the well in the compound.

“So there was nothing else we could do to gain access to her room. Luckily, Andy has a brother working with the state fire service. He called him and the firefighters came. But before they arrived, the girl kept screaming for help till it was too late.

“The fire service was only able to save the building and adjourning ones from burning. The fire only affected Pam’s room and the one next to it. But can you believe that the man did not scream at all throughout the incident? He was quiet till the firefighters were able to put out the fire and evacuate them.”

Fourteen-year-old Agabi Agatha, who was staying in the room next to Pam’s, considered herself lucky to have escaped the fire incident.

According to her, on that fateful day, she decided to await the arrival of her sister in another compound.

Agatha further said that few days to the incident, she had a dream that the house was gutted by fire, starting from Pam’s room.

She said, “I came to Makurdi two weeks ago. On Saturday, I decided to stay with a woman when my sister went to the market.

“It was when I returned to the compound to check if my sister was back that I saw our neighbour, Uncle Andy, running helter-skelter. I saw smoke coming out of our compound and I quickly ran inside to see if it was our room that was burning so I could save some items from getting burnt. I saw that it didn’t start from our room but had spread there. The uncle drove me away and warned me not to enter the room. He was pouring water there to put out the fire before firefighters arrived. A few days ago, I dreamt that fire engulfed this house, starting from Sister Pam’s room.”