A lovestruck man has finally tied the knot with a sex doll after dating for months. 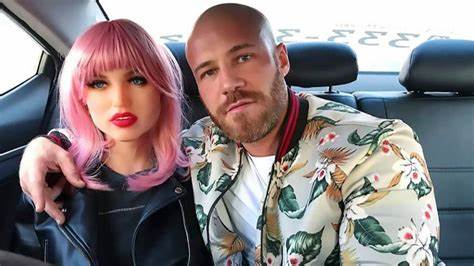 Yuri has gotten married to the sex doll he dated for months
A man has stunned family and friends after marrying a sex doll.
The bodybuilder from Kazakhstan tied the knot with his dearly beloved – a sex doll he dated for eight months before proposing a year ago.
Clad in a black tux and bow tie, Yuri Tolochko is seen planting a gentle kiss on Margo, who appears a bit stiff in her revealing white gown as she clutches a bouquet of flowers and stares in the distance.
The couple also shared a romantic first dance in front of dozens of guests who attended the traditional ceremony, which was shared on Instagram, The Sun reported.
“It’s happened. To be continued,” the actor and bodybuilder wrote after slipping a ring onto his bride’s finger.
The unconventional couple got engaged in December 2019, when the bald, blue-eyed hunk – who described himself as a “sexy maniac” — popped the question.
Images shared on social media illustrate the couple’s romantic lifestyle, including sunny vacations and bubble baths, captioned with hashtags including #ideal_relationship #true_love and #happy_wife_happy_life.
In one post of them working out together, Tolochko wrote: “Couples need to talk less and connect more. With time and experience, Margo and I realized that it takes more than words to have a conversation.”
He added: “Your partner sure deserves the best, but they have to do their part.”
Tolochko said he met Margo at a nightclub, where he rescued her from some unwanted attention, adding that they had planned to take the plunge in March before the coronavirus pandemic hit.
He told the Daily Star that the wedding was delayed again after he was attacked during a transgender rally in the Kazakh city of Almaty on Oct. 31, when he suffered a concussion and a broken nose after dressing as a woman for the event.
Tolochko, who identifies as a pansexual, told the Daily Star that “our story turns me on much more than sex itself.”
He added that he also enjoys BDSM – bondage and discipline, domination and submission, sadism and masochism.
“I love being tortured; I can endure a lot of pain. I love to dominate too. Margo is capable of what other people are not capable of,” he said, according to the news outlet.
The only requirements for a wedding to take place in Kazakhstan are that both consenting partners have to be male and female over 18 years old – with no mention of whether dolls are included.
Top Stories