The protesters threatened to occupy the premises of Agriculture Ministry from December 8, 2020 should the government fails to pay them. 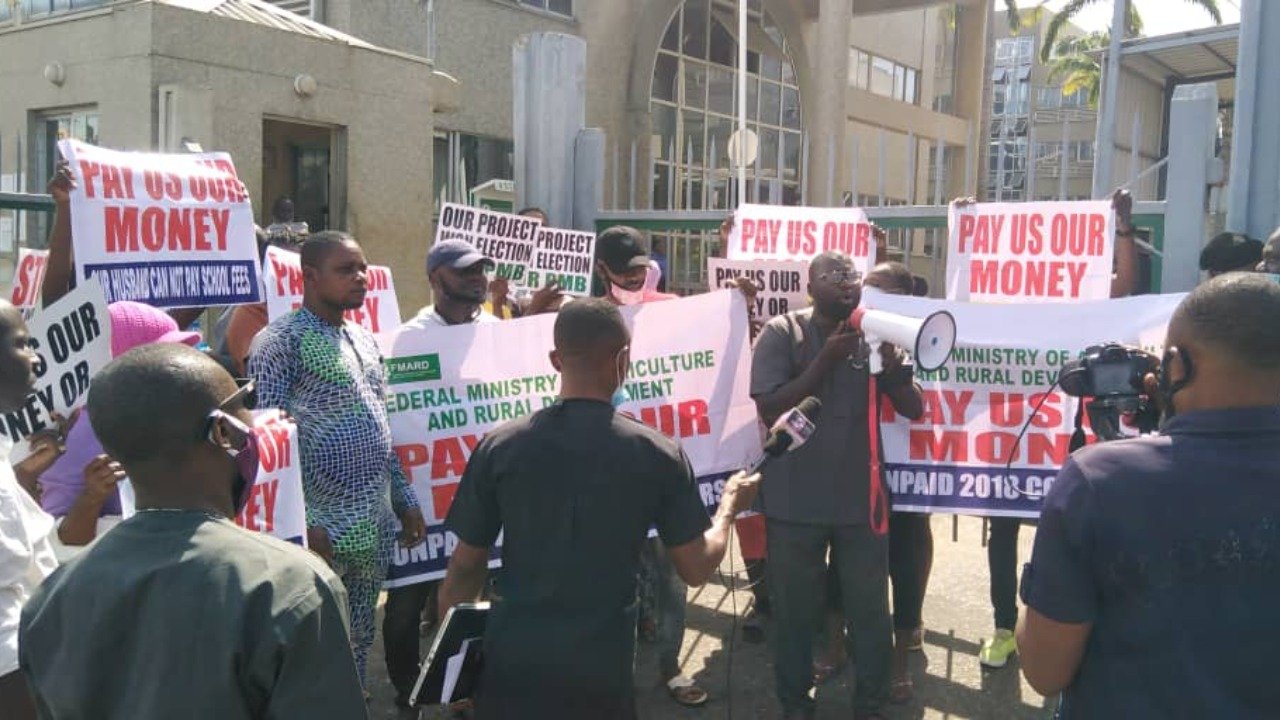 Some angry contractors have staged a protest at the Federal Ministry of Finance, a Daily Post report has shown.

The protesters who threatened to occupy the premises of Agriculture Ministry from December 8, 2020 should the government fails to pay them, lamented the adverse effect of the “continued refusal” of the Ministry to pay them even after they had completed the jobs awarded to them.

The protesters who held banners with inscriptions such as, “Federal Ministry of Agriculture and Rural Development, Pay us our money”; “Pay us our money our husbands cannot pay school fees”; etc, disrupted both inbound and outbound traffic to the expansive Finance Ministry Headquarters for several minutes until a top officer of the ministry came out to address them that, their letter to the Minister was going to be delivered to the appropriate quarters.

Speaking to journalists during the protest, the Coordinator of the group, Mr. Emeka Eniekwe said that they have petitioned several government agencies and top officials including the Head of Service of the Federation and the National Assembly for their intervention on the matter without much success.

Mr. Eniekwe stated that, their latest protest was informed by their discovery that the Ministry of Agriculture and Rural Development was planning to return some “recovered funds” of N16 billion to the government as “unspent funds”, whereas, the total sum the ministry owed them stood at N15 billion.

“Recently, we discovered that the money that was supposed to be used to pay us was warehoused in a private account by the ministry and a lot of aggrieved contractors reported the matter to the ICPC, and the ICPC waded into the matter and recovered N16 billion from an individual’s account.

“That is why we are resisting the ministry that it cannot keep us unpaid for 3years and there is N17 billion you want to return, yet our debt is N15 billion. There is no logic in that.

“So we are here to cry out to the Minister of Finance to come to our aid and talk to the Minister of Agriculture and Rural Development, Mr. Sabo Nanono and the Permanent Secretary of the ministry, Mu’azu Abdulkadir to pay us instead of returning the money to the government account”, Aniekwe said.

Meanwhile, the Director of Information in the Ministry of Agriculture and Rural development, Theodore Ogaziechi, has admitted that the ministry was indeed indebted to the contractors, but it had already verified the genuine contractors being owed and had forwarded the list for “due process” and possible payment.

He said, “It is a fact that the ministry is owing liabilities to some contractors and it just did not happen within one year ago, it has been an old liability before the current minister and the permanent secretary came to the saddle. And like you know there are budgets annually to take care of each contractual jobs”.

On the allegation of the recovered N16 billion, the ministry’s spokesman said, “I don’t know of the issue of recovery of N16 billion from any individual. That is their own statement which needs to be verified, I don’t know if you have gone to the ICPC to verify that.”

He, however, maintained that, “there are liabilities being owed contractors and the contractors have come here and made their points and the books have been checked and it has been found that it is true and the list of those who are being owed have been compiled by this ministry and it has been passed on to ministry of finance for due process to take place for them to be paid. So that is where we are.”