Nkama, commissioner of investment & Abuja liaison, Ebonyi state government, disclosed this in a letter dated November 30 and addressed to the anti-graft agency. 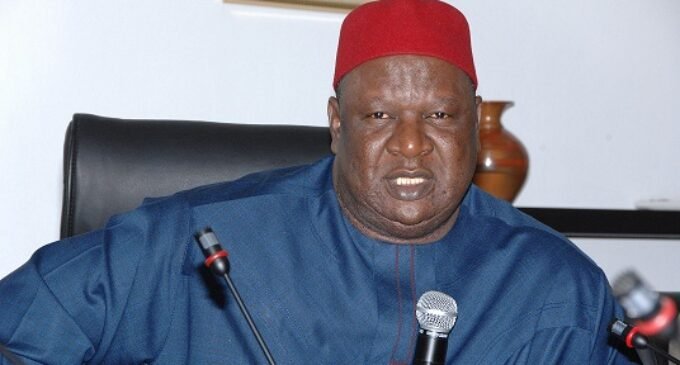 Ekumankama Nkama, the man standing as surety for former secretary to the government of the federation (SGF), Anyim Pius Anyim,has withdrawn.

Nkama has written to the Economic and Financial Crimes Commission (EFCC) on his decision to withdraw as the surety of Anyim.

Nkama, commissioner of investment & Abuja liaison, Ebonyi state government, disclosed this in a letter dated November 30 and addressed to the anti-graft agency.

Anyim, former senate president, is under investigation by the EFCC for reportedly using firms in which he had interest to award contracts to the tune of N13 billion from the Ecological Fund Account domiciled in his office.

The commission is also investigating how Anyim spent the sum of N520 million he allegedly collected from the office of the national security adviser under Sambo Dasuki on the eve of the 2015 presidential election.

He was arrested in November 2017 and later granted bail, with Nkama standing as his surety.

But the commissioner said recent events have compelled him to withdraw as surety to Anyim, citing the case of Ali Ndume,  senator representing Borno south, and Abdulrasheed Maina, former chairman of the Pension Reform Task Team (PRTT).

Maina is being prosecuted by the EFCC for alleged money laundering to the tune of N2 billion.

Ndume had agreed to stand as surety for Maina who is facing trial on 12 counts of alleged money laundering, a decision he would later regret.

One of the terms of the bail is for the senator to accompany the defendant to court on every date fixed for trial.

But Maina, who was released on July 28 after spending nine months in Kuje prison, went into hiding and refused to appear in court since his trial resumed on September 29.

In November, a federal high court in Abuja ordered that Ndume be remanded over the disappearance of Maina.

Maina was eventually arrested in Niger Republic on Monday and extradited to Nigeria.

Nkama said his decision to withdraw as surety for Anyim would avail him the peace of mind he needs to discharge his duties.

He also cited “recent events” in his state as reason for his decision.

David Umahi, governor of Ebonyi, and Anyim have been at loggerheads since Umahi defected from the Peoples Democratic Party (PDP) to the All Progressives Congress (APC).

Last Wednesday, Umahi sacked his political appointees from Ivo local government area of the state where Anyim hails from.

“You may recall, sir, that senator Anyim Pius Anyim was detained while under investigation and when granted bail conditions by commission, I availed myself as his surety knowing fully well the adverse effect his action and inaction could impose on my constitutional rights should he decide to act in a manner devoid of the expectations of him by the commission.

“Sir, I regret to inform you that recent events in the last two weeks in my state has given me food for thought and my conscience could no longer allow me to continue to stand as a surety for senator Pius Anyim.

“I have also considered the recent event involving Senator Ali Ndume and Mr Abdulrasheed Maina, former chairman of the defunct pension reform task team, I am most particularly convinced that my decision to withdraw as surety will best grant me the needed peace to function effectively in all responsibilities demanded of me.”