After jumping bail, the fleeing son of Abdulrasheed Maina has been arrested by security operatives. 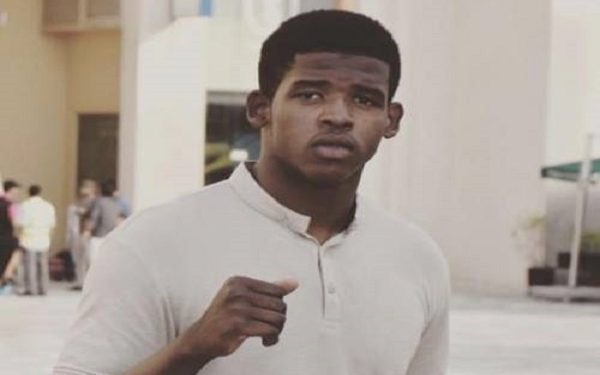 Faisal
Faisal, the wanted son of former Chairman of the defunct Pension Reform Taskforce Team, Abdulrasheed Maina has been arrested by security operatives.
Recall that Faisal was declared wanted by the Federal High Court in Abuja after he went into hiding.
The Economic and Financial Crimes Commission, EFCC, confirmed to the court on Thursday that the 21-year-old Faisal, who jumped bail since June 24, was apprehended by security operatives on Wednesday night.
Faisal is facing a three-count money laundering charge the anti-graft agency preferred against him.
Trial Justice Okon Abang had in a ruling on November 24, revoked his bail, even as he issued bench warrant for security agencies to arrest him wherever he is found.
The court equally summoned the member representing Kaura-Namoda Federal Constituency, Umar Dan-Galadima, who stood surety for the Defendant, to show cause why he should not be remanded in custody or made to forfeit N60million bail bond on the head of the Defendant, to the Federal Government.
Relying on section 352 (4) of the Administration of Criminal Justice Act, 2015, Justice Abang also gave the EFCC the nod to prosecute the Defendant in absentia.
The Prosecution had since closed its case against him after it called three witnesses that testified in the matter.
At the resumed proceeding in the matter on Thursday, counsel to the surety, Mr. M. E. Sheriff, urged the court to suspend hearing of the forfeiture case against his client in view of the arrest of the Defendant.
He said: “My lord, I was reliably informed that the Defendant had been arrested. He was arrested last night and he is in custody”.
Though he confirmed the development, EFCC’s lawyer, Mr. Farouk Abdullah, said the Defendant has not been handed over to the agency.
“He is not in our custody yet, but we got information unofficially that he has been arrested”, the Prosecution counsel added.
On his part, Mr. Anayo Adibe who announced appearance for Faisal, also applied for suspension of the committal/forfeiture proceeding against the surety “to allow the court to ascertain the authenticity or otherwise of the Defendant’s status”.
In a bench ruling, Justice Abang dismissed the adjournment request and ordered the surety to move the application he filed to show cause why he should not forfeit the bail bond to FG.
EFCC alleged that Maina’s son had sometimes between 2013 and 2019, received the sum of N58.11million, being proceeds of a corrupt act by his father.
He was also accused of failing to properly declare his assets before the EFCC.
Before he was released on bail, the Defendant, was initially remanded in police custody after the prosecution notified the court that he was being investigated on allegation bordering on his alleged possession of illegal firearm.
Faisal had reportedly pulled a gun to challenge operatives of the Department of State Service, DSS that arrested his father at a hotel in Abuja on September 30.
It will be recalled that his father, Maina, who is facing a separate 12-count money laundering charge, also jumped bail and was later arrested in Niger Republic by the Interpol.
Top Stories