Sam Connor, 14, asked a pal when a train would be going fast enough to kill him moments before the tragedy at Chertsey station in Surrey. 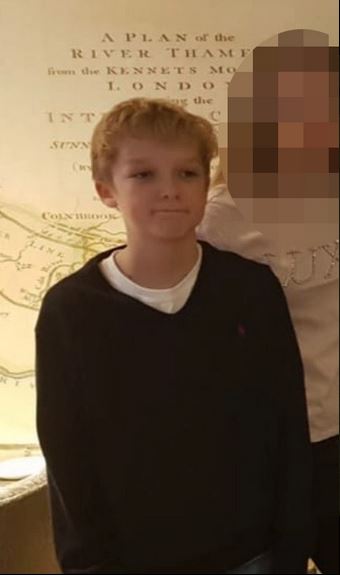 A 14-year-old schoolboy, Sam Connor, texted a girl he liked before killing himself, it has been revealed.

The boy texted the girl saying "I'm going for a while, don't forget me" before jumping under a train in front of classmates, an inquest heard today.

Sam Connor, 14, asked a pal when a train would be going fast enough to kill him moments before the tragedy at Chertsey station in Surrey.

The Year 9 pupil, who suffered from anxiety, had received a "negative" report from The Salesian Secondary School on July 15 last year.

His family said the report would have "upset him".
An inquest in Woking also heard how Sam had messaged a girl he liked, saying: "I'm going for a while, don't forget me."

CCTV was shown to the inquest today of Sam's last moments as he waited on the platform with around 50 classmates.

He could be seen speaking with a friend as he crossed the yellow hazard line.

The inquest heard Sam was standing so close to the edge of the platform another pupil called out "don't do it!"

This was a common joke the youngsters shared when someone was standing over the yellow line, the hearing was told.

A witness told the inquest Sam handed his bags to a peer and asked him to "look after them for a minute".

He then tragically jumped in front of the train while singing Brighton Rock by Queen, which his pals were playing out loud at the time.

Pupils said they did not believe Sam was being bullied and explained he was popular in his own group of friends.

He had been referred to mental health workers in Surrey in July 2013 due to issues around food intake, which they believed were psychological.

But this was closed by October that year as Sam was trying new foods and seemed more positive.

The 15-year-old was seen by witnesses talking and whispering while looking down at the tracks "as though something was about to happen".

But giving evidence, the boy said he could not remember what was discussed moments before Sam jumped on the tracks.

Mr Travers said: "“Let me be frank with you, you are seen to walk up that platform quite deliberately. Sam then follows you and there is plainly conversation going on between the two of you.

“As Sam walks towards the platform edge, you walk back from Sam and walk back in the opposite direction. I want to know what conversation you had and what was being said between you and Sam at that time please.”

The inquest heard the teen had an "enjoyable dinner" on a trip to see his sister the night before his death.

His mum had taken him to the station the following morning, where she told him to "have a nice day".

School friends told the hearing Sam had been heard talking about suicide in the lead up to his death but said they did not think this was unusual because he often discussed killing himself.

Police also discovered Sam had told a classmate that he was considering suicide on the day he died.

The boy said: "During the lesson, Sam was slouching as he usually did. He told me that he wanted to commit suicide. I cannot remember his exact words but he either said ‘I want to’ or ‘I am going to’.

“He was going in to far more detail than usual, talking about the station and jumping in front of a train. He asked me if I thought the train would be going fast enough to kill him. Sam has said similar things in the past, but I always though that they were throwaway comments.

“He tried to give me his phone, iPod and keys but I did not take them.”

Paying tribute to Sam, his family said in a statement: "“He was a kind, caring, gentle-natured boy from birth.

"He never had a bad word to say about anyone. He was polite and well-mannered at all times. Sam came from a loving, supporting home.

“Sam was a sensitive soul and often thought of others, especially his family and friends. He would always ask, 'how was your day.'?”