End Of The Road! Child-Stealing Syndicate That Lures Children Using Biscuits Smashed In Imo And Enugu


The syndicate was smashed on Friday, December 11, by the new security outfit, Rapid Response Squad, RRS. 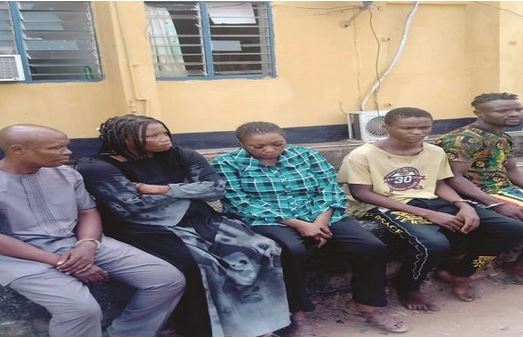 A syndicate that specializes in abducting children between ages 2 and 3, using biscuits and sweets as baits has been smashed by the Abia State Police Command.

He explained that the police arrested them after they abducted the children of one Mrs Happiness Monday and Mrs Rejoice Ikechukwu, both of Umuochialla village in Osisioma Local Government Area of Abia State.

"Based on the complaints, operatives of the State Rapid Squad, RRS, led by its Commander, SP Johnbull Obioguru, swung into action.

"The investigation resulted in the arrest of  Chinonso Slyvanus aged 17 years from Umuochalla in Osisioma Local Government Area at his hideout in  Owerri,  the Imo State capital and Ekene Duru aged 31 years from Ariaria by Umuochalla , Osisioma who was arrested in his hideout at Enugu, Enugu State."

It was gathered that after the arrest of Chinonso Sylvanus and Ekene Duru by operatives of the RRS, they called their buyers one Rose Okoro aged 45 years from 5 OPM Avenue Port Harcourt, Rivers State and Ngozi Ukpai, aged 38 years from Igwurita, Port Harcourt, who bought the kidnapped children from them at N200,000 for each.

When Ngozi and Rose arrived at the meeting point to get the abducted children, they were rounded up by men of Rapid Respond Squad (RRS).

Both women confessed that they bought the abducted children from Chinonso Sylvanus and Ekene Duru at the rate of N200,000 and resold the children at the rate of N450,000 to one Chidi Okoro who runs a clinic named Prostel Hospital, formerly known as God’s Favour Hospital and Maternity Umuode in Osisioma.