Many of the students are still missing while their parents said they are in distress. They called on relevant authorities to rescue their wards. 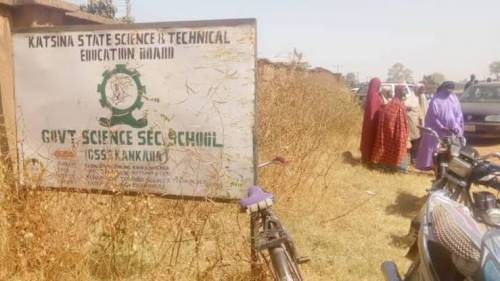 The students on Saturday gave a distressing account of the night they spent in the bushes following the Friday’s siege on their school by bandits.

Many of the students are still missing while their parents said they are in distress. They called on relevant authorities to rescue their wards.

SaharaReporters had reported that hundreds of motorcycle riding bandits, armed with sophisticated weapons, attacked the boys’ school in Kankara town of Katsina State at night.

During the attack, hundreds of students scaled through the fences of the school in search of safety while the rampaging bandits kept shooting and asking the fleeing students to return.

The attack on the school took place a few hours after President Muhammadu Buhari landed in Katsina and proceeded to Daura, his hometown for a week-long private visit.

The siege at the Kankara science school was one of the several attacks in towns and villages in Katsina State between Thursday and Friday, where bandits killed some people and abducted others to unknown locations.

An SS1 student, who was amongst those who spent the night in the bush after they fled, told DailyTrust that the whole incident was like a dream.

He said, “We left classes after our night prep around 9:30 pm and retired to our dormitories. At about 10:30 pm, after some of us had gone to bed, we began to hear gunshots and the senior students rushed to our hostels to wake us up.

“While some of them said we should run for our lives, others said we should gather in the hostels first to monitor the situation before the next line of action.

“When we heard the sounds of the gunshots getting closer, we all ran towards the fence and jumped over to the bushes. The gunmen then began to call us back, saying that nothing will happen to us,” he said.

“We ran for some hours into the bush and gathered somewhere under the trees and sat until when we heard the early morning call to prayer,” he said.

He said those trapped in the school lost their phones and money to the bandits.

He told Daily Trust on Sunday that most of the students sustained injuries while jumping over the fence and running into the bus.

“But we thank God that we are back home because we learnt that the attackers kidnapped others,” he said.

A prefect, who does not want his name mentioned, said the Friday night incident was like a film.

“Some of us thought it was the end of time…The gunshots were thunderous. I believe the attackers wanted to kill everyone, maybe just to hit the headlines because as students, we don’t have anything to give them.

“And almost all of us are children of the poor and so, I was wondering whether they wanted to abduct us for money or just to kill us the way they are killing people without any reason,” he said.

Another student, said: “We ran and ran for hours in the bush. Whenever we wanted to stop, we had no option but to continue because we were afraid and traumatized. It was when we got exhausted that some of us gathered under a tree waiting for the dawn,” he said.

Another student in the school, said he would go back to his parents until the security situation is improved. “You have to be alive before you can become something in life. I am disappointed that this is the state where the president hails from.

“From what we are seeing, there is the likelihood that one day every other person would be killed in Katsina and neighbouring states by bandits who now rule like emperors.

“We spent the night in the bush, and some of us that returned are just lucky. I am sure some of those that missed their bearing would end up in the bandits’ den. It was traumatic because there was no water for us to drink and we were all exhausted,” he said.