Uganda Has Been Discriminatory Towards Nigerians – Nigerian Lady Recounts Her Experience


The lady narrated how she was denied a work visa as she alleged that Ugandan authorities held her passport for 7 months because of an appeal. 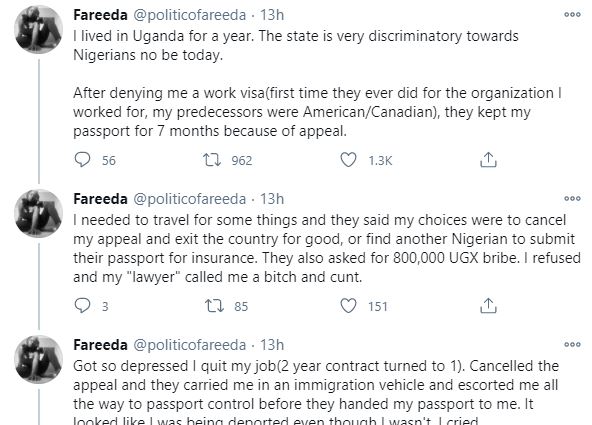 Following the arrest of Omah Lay and Tems, a Nigerian lady took to Twitter to accuse Ugandans of being discriminatory towards Nigerians.

The lady recounted how she was denied a work visa as she alleged that Ugandan authorities held her passport for 7 months because of an appeal.

The lady on Twitter with the user name @politicofareeda, also recalled how she was slut-shamed and called a “cunt and bitch” by her lawyer after she refused to pay a bribe.

Read Her Thread Below;

“I lived in Uganda for a year. The state is very discriminatory towards Nigerians no be today. After denying me a work visa(first time they ever did for the organization I worked for, my predecessors were American/Canadian), they kept my passport for 7 months because of appeal.

I needed to travel for some things and they said my choices were to cancel my appeal and exit the country for good, or find another Nigerian to submit their passport for insurance. They also asked for 800,000 UGX bribe. I refused and my “lawyer” called me a bitch and cunt.

Got so depressed I quit my job(2 year contract turned to 1). Cancelled the appeal and they carried me in an immigration vehicle and escorted me all the way to passport control before they handed my passport to me. It looked like I was being deported even though I wasn’t. I cried.

So yeah. Uganda is terrible to us. I have more east african terrible treatment stories but Uganda definitely took the cake.”