A police officer seen enjoying himself and dancing leg work while controlling traffic has been commended by Nigerians. 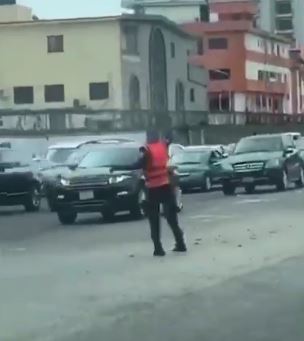 Police officer filmed dancing leg work while controlling traffic
Nigerians have commended a police officer dutifully enjoying and controlling traffic after his video surfaced online.
He was seen scattering the road with some cool leg work moves.
A motorist driving to work came across the traffic warden who was controlling traffic with excitement and some amazing dance moves.
He decided to record the man at work as he did some cool leg work just as he was giving the signal for cars to pass by.
Nigerians have been celebrating the man for being filled with so much vibes.
Watch below:
Top Stories