Heartbreaking!! One-year-old Dies After Swallowing Battery That Generated Electricity Inside Her


One-year-old Reese Smith died last Thursday, weeks after taking the button battery out of a remote control at her home in Lubbock, Texas, and swallowing it. 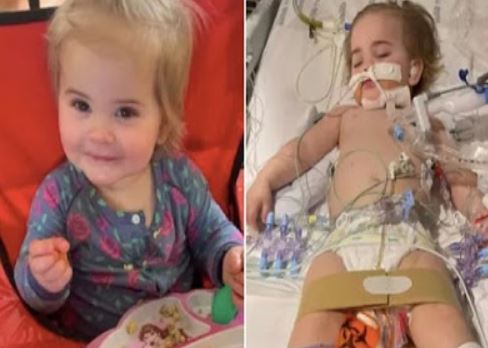 A toddler who swallowed a tiny button battery which began generating electricity inside her and eroded through her tissues has died.

One year-old Reese Smith died last Thursday, weeks after taking the button battery out of a remote control at her home in Lubbock, Texas, and swallowing it.

Reese suffered severe burns to her throat, oesophagus and vocal cords, with pediatrician Dr Thomas McGill, who treated Reese, saying the youngster’s mucus membrane had been burned ‘completely black, as if you were roasting a marshmallow.’

Dr McGill, who treated Reese at University Medical Center in Lubbock, explained that one side of the flat battery has a positive charge, while the other has a negative charge.

After it settled in Reese’s oesophagus, the battery began generating electricity, before eroding through the oesophagus and settling in Reese’s airway.

Reese’s mother Trista, a hairdresser, noticed her daughter could not stop coughing last month, and worried the little girl may have swallowed the battery after noticing a remote whose back had been taken off. Trista rushed her daughter to hospital, where an x-ray confirmed her worst fears. Reese was later transferred to Texas Children’s Hospital in Houston.

There, she underwent multiple surgeries to remove the battery and try and repair the damage to her insides, the 17 month-old eventually succumbed to her injuries despite surgeons’ best efforts to save her. Doctors said the button battery had been inside Reese for too long to save her.

Sharing news of Reese’s death on Facebook on December 18, Trista wrote: ‘Heartbroken…not much more to say right now. I’ve been trying to find the words for a while. I got to come home today. My mom came home too.

We were a family member short though. ‘It’s a heartbreak I will never be able to express. I will never forget looking out that window on the plane knowing my baby wasn’t with me.

‘Today is a sad day on Earth and a day of celebration in Heaven. Our precious baby Reese died this morning and is no longer suffering. She is pain-free at home with our Savior. ‘She is most likely bossing everyone around up there.

Thank you for all of your countless prayers for Reese and our family. ‘At this time, we ask that you continue to pray hard, but this time for us…. especially Blake as we learn how to live without our baby. Just typing that doesn’t even make sense to me.’