The entertainment industry in Nigeria was hit by many tragedies including the death of many industry personalities. 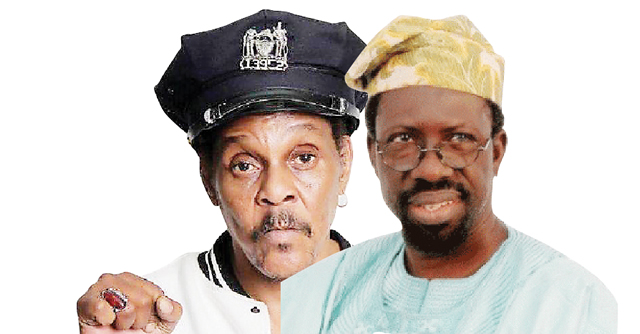 Majek Fashek and Pa Kasumu
2020 has been a rather awful year for the entertainment industry as the sector lost important personalities.
Here is a list of industry personalities that lost their lives as compiled by Punch.
Pa Kasumu
Renowned actor, Kayode Odumosu, fondly referred to as Pa Kasumu by his fans and lovers, died on March 1, 2020, after a long battle with various illnesses.
The veteran actor was a household name in the Yoruba speaking sector of the Nigerian film industry. In 1969, he featured in the popular play titled, Omo Ekere, Sango: The Legendary African King, and Jesu Mushin.
Frank Dallas
Veteran Nollywood actor, Frank Dallas, died on February 19, 2020. It was reported that the actor died after suffering cardiac arrest in his hotel room in Umuahia while attending a summit.
The actor who was known for his role in action movies was popular in the 90s and was famous for his role in films like A Night To Remember, Blind Love, Sweet Love, etc.
Yomi Obileye
Nollywood lost yet another talent this year with the demise of veteran actor, Yomi Obileye, on April 24. He died of an undisclosed ailment. The news of the star’s death was announced by comedian, Gbenga Adeyinka, who took to social media to share a tribute.
The deceased starred in Tade Ogidan’s movie, Hostages, in 1997, as well as the soap opera Palace. He also starred in Head Gone in which he played the character Dr. Smith.
Majek Fashek
Fondly called the ‘Rainmaker’, Majekodunmi Fasheke, was one artiste who ‘shook’ the entertainment industry in his lifetime. He was said to have died in his sleep on June 1, 2020. Before his death, the singer had battled some health challenges, and at some point, undergone rehabilitation for addiction.
He was known for hit songs such as Send Down the Rain, So Long for Too Long, Hotel California, Holy Spirit and Promised Land. At the height of his career, he was featured on the David Letterman Show in the United States of America.
Chico Ejiro
Popular Nollywood filmmaker, Chico Ejiro, died on Christmas day.
Known as Mr Prolific, the moviemaker owned a production company called Grand Touch Pictures and he directed over 80 movies within a five-year period — each one shot in as little as three days.
It is often said that he held the record of the Nollywood director with the highest number of released movies.
He was the brains behind movies such as Full Moon, Festival of Fire and Slave, among many others.
Top Stories