Esther, who is currently recuperating in a NAPTIP shelter said she was constantly starved, beaten with belt and cable by her mistress. 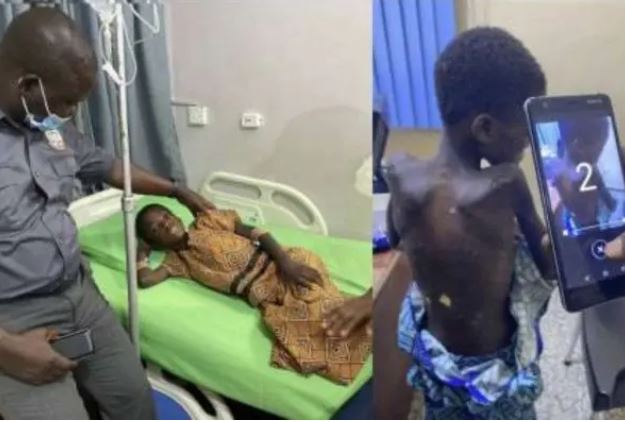 A 12-year-old girl identified as Esther who was mistreated by her mistress has narrated her horrible ordeal in the hands of a woman who bought her from suspected human traffickers for N15,000.

The young girl was rescued by officials of the Human Initiative for the Downtrodden, and Honeybols Foundation after residents of Williams Estate, Akowonjo, Egbeda placed a distress call to the NGOs.

According to HID president, Comrade Kenpeacemaker Onoja, residents said Esther was often seen eating from the dustbin and bathing with water from the gutter.

Esther, who is currently recuperating in a NAPTIP shelter said she was constantly starved, beaten with belt and cable by her mistress.

“Mummy beats me with a cane and any other thing she sees. She gives me food sometimes and I pick food sometimes from the dustbin. She beats me most times when she complains about how I sweep the floor. She tells me I don’t sweep well".

When asked why she was usually seen bathing outside with water from the gutter, she said her madam had directed her to get herself cleaned outside the compound and not inside the bathroom.

According to a statement made available to SaharaReporters by the NGOs, Makinde and members of the human trafficking syndicate that sold the child to her have been arrested by the police while the young girl who was immediately given medical attention, has been taken to the National Agency for the Prohibition of Trafficking in Persons (NAPTIP) for shelter.

“Omolola Adepekun and one other person who simply identified herself as Modupe have been arrested in connection with the case of child trafficking, abuse and slavery of the 12-year-old girl child, Esther,” the statement says

“Police officers from Panti have visited the girl for further investigation.”