He said Sowore and the other activists locked up since their arrest on New Year’s Eve in Abuja committed no crime for holding a protest against bad governance. 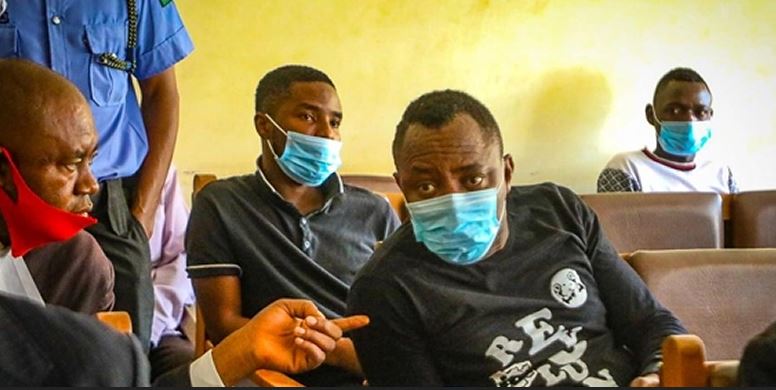 Agba Jalingo, a Nigerian journalist and activist, has said that the regime of the President Muhammadu Buhari is scared of Sahara Reporters’ publisher, Omoyele Sowore.

He said Sowore and the other activists locked up since their arrest on New Year’s Eve in Abuja committed no crime for holding a protest against bad governance.

Speaking in an interview with The PUNCH, Jalingo said Sowore was moved from the Kuje prison to police custody on Tuesday because prison officials were afraid he would ‘revolutionarise’ other inmates at the facility.

The PUNCH had reported that a Chief Magistrates’ Court in Wuse Zone 2 area of Abuja on Tuesday adjourned till Friday, the ruling on the bail application filed by the convener of #RevolutionNow protest and four others.

The others are Juwon Sanyaolu, Peter Williams, Emmanuel Bulus, and Damilare Adenola.

The accused are standing trial for alleged unlawful participation in a protest on New Year’s eve.

The magistrate, Mrs Mabel Segun-Bello, directed that they should be transferred from the Kuje Correctional Center, where they were previously remanded, to the Force Criminal Investigation Department at Garki Area 10, Abuja.

Commenting on the trial of Sowore and others, Jalingo said the government harasses innocent citizens who demand a better Nigeria but negotiates with Boko Haram members and bandits who slaughter scores of Nigerians at will.

Jalingo was released last February after he was jailed for 179 days at the Afokang Prison in Calabar following an allegation of treason by the Cross River State Governor Benedict Ayade.

Jalingo said, “They arrested him (Sowore) and kept him longer than the statutory number of days and still could not bring up a charge. They are just harassing him just like they have been harassing all of us.

“The system is afraid of Sowore. If not so, why are they harassing him? Boko Haram is there, bandits are there and they are negotiating with them. These people are killing up and down but the government is negotiating with them, they are granting them compensations and amnesty. Then, you keep dragging a man that you simply don’t have anything to hold against every day.

“All of us have been shouting, ‘Free Sowore, Free Sowore’, but Sowore is not worried where he is.

“When they took him to Kuje, the authorities in Kuje rejected him because they are afraid that he is going to revolutionarise other inmates. So they protested, they didn’t want to admit him. Even when I was in Afokang Prison in Calabar, it was the same thing because of the way the other prisoners were coming to listen to me. Keeping Sowore in the prison will cause more problems for them. That is why today, the court said they should keep him in police custody.”

When asked whether there is any plan for mass action to protest the detainment of Sowore, Jalingo said, “Let’s wait for what happens on Friday. The court has said they should bring him back on Friday, so, we are waiting. He is our leader and we are not going to keep quiet.”

Sowore, who was earlier declared a prisoner of conscience by Amnesty International in 2019, was detained for several months by the Buhari regime for allegedly calling for a revolution.

He was denied bail several times and even re-arrested inside the Federal High Court. However, he was released after domestic and international pressures in December 2019.