A notorious gang of kidnappers have been apprehended by security operatives in Adamawa state. 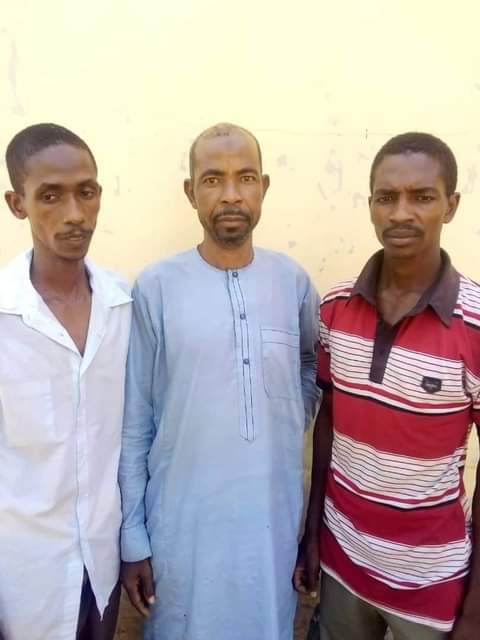 The suspects
Two members of a notorious kidnap group have been arrested in Adamawa by the police.
It was gathered that the kidnappers write their victims before striking.
Spokesman of the State Police Command, DSP Sulaiman Yahaya Nguroje, who disclosed this in a statement on Tuesday, January 12, said the suspected criminals; Abdullahi Muhammed, Musa Usman and Suleiman Ibrahim were arrested at various locations and linked to criminal conspiracy and kidnapping activities.
"On the 3rd January, 2021, one Engr Halidu Adamu, a staff of Adamawa state waterboard woke up and saw a threat letter enveloped and sealed with one live ammunition of AK47 dropped at the gate of his house, that reads 'we are hired killers paid to kill you, therefore you either pay two million or prepare to die'" the statement reads.
"The case having been duly reported, the Command immediately deployed its professional (SIB) operatives and they apprehended the suspects. They will be charged to court on conclusion of investigations.
"The Command has commended the police operatives for their dedication to duties, which resulted in the successes recorded.
"Similarly, while appreciating the citizens for their support so far, the Command calls for improved partnership and collaboration between the citizens and the police, particularly in the area of providing useful information required in tackling crimes and apprehending unrepentant  in the state.
Top Stories