She talks about the killing of her five-year-old grandson, Osinachi Stephen, and how his decomposing remains were found in an abandoned car. 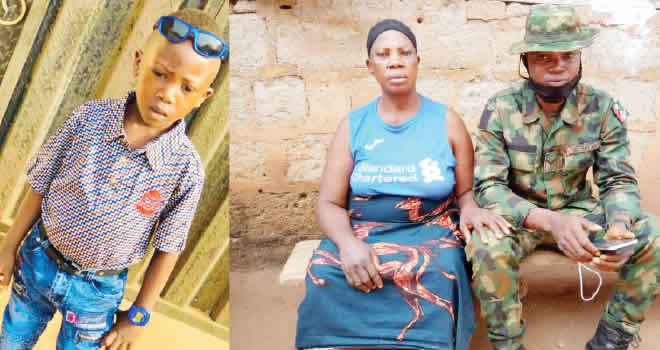 Mrs Stella Aguguo, a 50-year-old Nigerian woman has told of how her grandson was found dead.

She tells CHIDIEBUBE OKEOMA about the killing of her five-year-old grandson, Osinachi Stephen, and how his decomposing remains were found in an abandoned car.

My name is Mrs Stella Aguguo. I am a 50-year-old widow from Isiala Mbano Local Government Area (of Imo State). This is exactly one year after I lost my husband. I live here in Ishiuzor, Egbu, Owerri, with my family.

Osinachi is my grandchild. His father, Stephen, a military officer serving in the North-East, is my first son.  On January 5, being Tuesday, I sent Osinachi to a compound in the neighborhood where they sell provisions to buy pure water (water in sachet) for me. Only one family lives in that compound. Azunna Orisakwe, his wife and children are the only people living there. The compound is fenced and has a gate. I became worried when after about 15 minutes my grandson had not returned. I quickly rushed to the compound and met Azunna’s wife and asked her if she saw Osinachi. She said the boy came there to buy pure water and left after she told him that she didn’t have water.  As I was leaving, I met the husband, Azunna, at the gate and I asked him if he saw my grandchild and he said he did not. He immediately joined me in the search for the boy. I raised the alarm and the villagers launched a search party from Tuesday till Thursday, when he was found dead.

Where was he found dead?

Who exactly discovered the body in the car?

On Thursday night, Azunna came to my house with two policemen and requested to see me. I came out and one of the policemen asked for two of my children. My children came out and the policeman asked me to go back inside the house while they left with my two sons for Azunna’s house.  I knew something was wrong when I heard the voice of one of my sons, Onyebuchi, screaming at Azunna’s house. It was then that I was informed that my grandson was found dead in a car parked inside Azunna’s compound, the very place I sent him to buy pure water for me. By the night of Thursday when Osinachi was found dead, his corpse was already decomposing.

What did Azunma say about the discovery?

I suspect foul play because before Azunna came to my house with the two policemen, he had already sent his wife and children away. He was always coming to my house to ask me if Osinachi had returned. Before he came with policemen on the night of Thursday, he had earlier at 2pm come around to ask me if Osinachi had been found. Azunna deceived me. He knew my grandson’s whereabouts but he was coming around to deceive me.

Where is Azunna now?

He is in the police custody now. He was the one who invited the police after moving out his wife and children. I know he knows what happened to Osinachi. He will also produce those who advised him to move his family and invite the police.

What do you think could have led to your grandson’s killing?

I sense foul play. My grandson was killed and there were no bruises on his body. The car in which he was found dead was locked. They had to break the glass in order to bring my grandson’s corpse out. What really happened? This is the question the government needs to give me an answer to. The car is stationary and had not been driven out of that compound for over a year. The death of Osinachi is annoying. What could such an innocent boy done to anybody to have deserved death as punishment? I want those who killed my son to be killed. Everybody who had a hand in his death should be killed, too.

What kind of a child was Osinachi?

My God! Osinachi was a child I started nursing four years ago when he was just one year old. His father, my first son, is a military man who is serving in the North-East, fighting Boko Haram. I asked that Osinachi be brought to me and his father brought him to Owerri for me. Since then he had been with me and we were very close.

Osinachi was a very brilliant, smart, intelligent and wise child. He was a delight to be with. At his age, he was the one who swept the compound on a regular basis. He didn’t like staying idle. He liked running around and delivering on whatever assignments were given to him.

Which school was he attending and what class was he?

He was attending Noble Nursery and Primary School. He was in Nursing 3 and he was doing very well in school. Ossy was very bright in school; he was outstanding. His schoolmates and teachers, who came here on a condolence visit, have just left.

What was Osinachi’s future ambition?

He told me on several occasions that he wanted to become a Catholic priest. When he attended church services, he would rush to the parish priest’s seat and sat there. He would always partake in the Holy Communion. He would describe the Holy Communion as sweet. He was very likeable and he loved going to church services. I took him to church for baptism after he was brought from Borno to Owerri. He was my first and only grandchild from my male children. This is a big blow to me, to my family and I am deeply pained.