A power-drunk military officer has assaulted a photographer who refused to refund him for prewedding photos he took after breaking up with his fiancee. 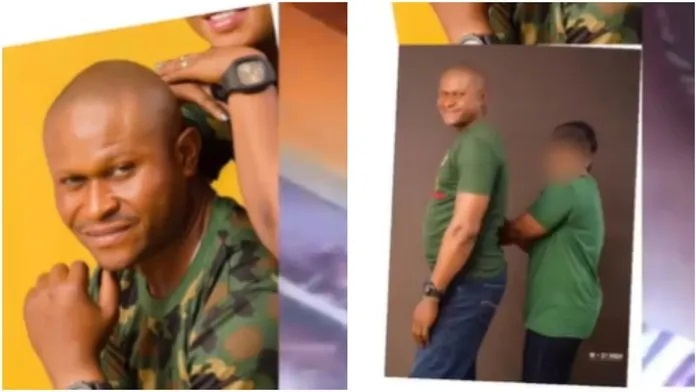 Sam Ineni
A Nigerian man, Sam Ineni who is a military officer has reportedly attacked a photographer, MostHigh in Ogun state.
It was gathered that the man had planned to marry his fiancee and contracted the photographer for prewedding shoot.
However, the man later broke up with the woman and went to the photographer to demand for refund.
According to multiple sources, Sam had paid for pre-wedding photoshoot only to return yesterday, to allegedly demand a refund stating that his introduction to his girlfriend had been cancelled.
“The pictures we took for him had already gone into circulation as his girlfriend had posted it on social media. We were shocked when he came to our store to demand a refund because he called off the wedding.
We refused and he caused chaos hence destroying our equipment. He also assaulted our staff, collected his money and demanded that we pay for his t-fare. It’s disheartening that an officer of the law could do this to a small business owner,” a source said.
Meanwhile, Nigerians on social media are presently thanking God that the fiancee is no longer engaged to the military man.
One Seun wrote “Thank God the marriage didn’t work , she would have seen hell in the marriage, domestic violence”
One Elsie wrote “Its the girl that broke up with him not the other way round. This must be an abusive relationship, guess thats why she ran”
One Ella wrote “Demanded for Tfare ? Supposed father in law should watch his back o …that guy go come ask of refund of anything he gave him or d family”
Top Stories

COVID-19: Nobody Is Safe Until Everyone Is Vaccinated - PTF Chairman, Boss Mustapha
Recent Stories