Violence had erupted in Igangan, Ibarapa, on Friday in the Fulani community, during which the houses and property of the Seriki Fulani, Alhaji Saliu Abdulkadir, were burnt. 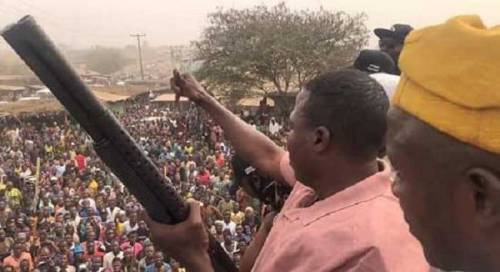 Chief Sunday Adeyemo, a Yoruba activist who is also known as Sunday Igboho, has reacted to claims that he burnt down the home of a Fulani leader.

Igboho said he and his men are not behind the burning of the house and property of the Seriki Fulani, Salihu Abdukadir, in the Ibarapa North Local Government Area of Oyo State, saying the indigenes of the settlement were responsible.

Igboho, speaking through his Personal Assistant, Salami Oladapo, told SaharaReporters that the activist spent only about two hours in the town, on the instruction of the police and the soldiers, who were briefed on Igboho’s coming.

Violence had erupted in Igangan, Ibarapa, on Friday in the Fulani community, during which the houses and property of the Seriki Fulani, Alhaji Saliu Abdulkadir, were burnt.

Abdulkadir had told SaharaReporters that he, his wives and children were sent out of the settlement, adding that 11 vehicles and houses were burnt in the process.

The Seriki had fled the community with his family, as aggrieved youths put fire to the settlement.

Speaking with SaharaReporters, Igboho’s P.A, Oladapo, said his principal nor his supporters were responsible for the arson.

He said, “We were not the ones who did that. It was after we left; the boys know one another. They said they could not go with us, because the Fulani could attack them. So, they entered the settlement through a forest. They are not part of us. They are the indigenes. It was not Sunday Igboho’s men.

“They burnt the house after we left. Nobody can say they saw us at the scene of the event. The police Area Commander followed us when we had the town hall meeting in the area. The Fulani cannot just be raping and kidnapping our people.”

Earlier, the Arewa Consultative Forum had decried the violence on the Fulani community, saying “It is a dangerous trend.”

“If there are reprisal killings, and there are many Yoruba in the North, as you know, then this country will no longer exist as it happened in 1966 when a fake report went out that northerners were being killed in the East. That was why the reprisals killings of the Igbo in the North took the dimension it took.

“After some time, it was discovered that no single northerner was killed in the east. But then the damage had been done. We fought a civil war and over two million persons were killed. So this is a very dangerous dimension. I don’t know what could have caused it. I have not seen the report,” the forum’s National Publicity Secretary, Emmanuel Yawe, had said.