Policemen in Lagos state have apprehended a fake officer and a POS robber during a on Friday. 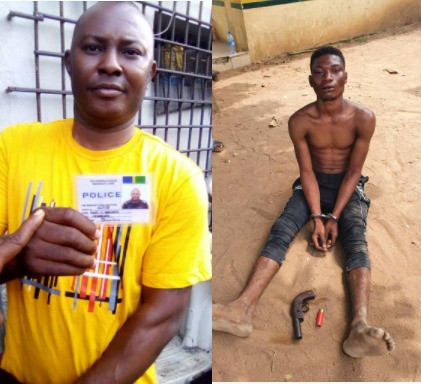 The fake police officer and POS thief
A man who specialized in stealing from POS operators has been apprehended and paraded in Lagos state. He was paraded alongside a fake police officer identified as David Omoruyi.
According to the police, the POS thief identified as 24-year-old Korede Anifowose, of Omisakin Street, Agbelekale Abule Egba was arrested for attempting to rob one Sola Musa, a POS operator, at Fatolu Bus Stop, Ipaja, on Friday, January 22.
The suspect, Korede, and his accomplice, now at large, had attacked the POS operator who raised an alarm during the attack. The suspects were chased by the Anti Crime Police Operatives stationed at the area. Korede was arrested and one locally made pistol and some expended cartridges were recovered from him.
The spokesperson of the state police command, CSP Muyiwa Adejobi, said the command has deemed it necessary to beam its searchlight on attackers of POS operators based on some complaints the command has received on the antics of the criminals who terrorize POS operators and those dealing or transact with liquid cash in the state.
He said the state Commissioner of Police, Lagos State, CP Hakeem Odumosu, has mandated the Divisional Police Officers to beef up security around those dealing with liquid cash in their businesses as the command can not afford to leave them or anyone in the state unprotected.
Giving more insight on how the fake police officer was apprehended, Adejobi stated that police operatives attached to Area Command Area E Festac, on 19th January 2021, at about 1212am, arrested one David Omoruyi, m, 37, of No 4, Job Street, Afromedia, Otta-Awori LCDA, Lagos in possession of fake Police Identity Card and 30kg of weeds suspected to be Indian hemp.
Adejobi said the suspect, in company of his fleeing colleagues, were seen with some bags of Indian hemp on their heads at Alaba Rago Market, Ojo Lagos, when the policemen accosted them and eventually arrested David while others fled.
Adejobi said;
''David Omoruyi claimed he is a serving sergeant attached to Mopol 49, Epe, Lagos State. But after due interrogation and investigation, he confessed to be a fake policeman. He confessed that he used to flash the fake ID to gain access and for easy passage of their loots or drugs whenever they are on business.
The Commissioner of Police, Lagos State, CP Hakeem Odumosu, has directed that the suspects be transferred to the State Criminal Investigation Department, Panti, Yaba for discreet Investigation, while their fleeing members be searched for and brought to book with immediate effect."
Top Stories