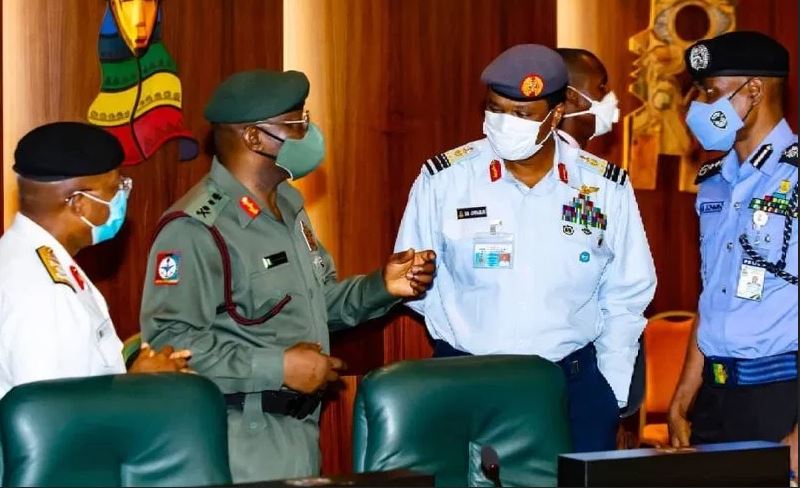 Nigeria’s service chiefs officially resigned from service after about 40 years in service.

Presidential spokesperson, Femi Adesina, said on Tuesday that President Muhammadu Buhari accepted the immediate resignation and retirement from service of the Chief of Defence Staff, Gabriel Olonisakin, a general.

Their stay, which is said to be the longest in the history of the armed forces, was characterised by controversies over their retirement.

Generally, the minimum age for enlisting into the Nigerian Armed Forces is put at 18 years old for voluntary service.

A military personnel is also expected to retire at 60 years or after putting in 35 years of service, according to the Federal Civil Service Rule.

But the Olonisakin-led service Chiefs spent between 36-40 years in service, far above their retirement age.

They were appointed on July 13, 2015, after President Muhammadu Buhari assumed office.

President Buhari first extended their services by two years in 2015, and later renewed it in 2017 without an end.

But more than five years on, they were unable to implement any coherent strategy to defeat Boko Haram, which turned out to be one of the main reasons Nigerians called for their sack. Although the terrorists were largely limited to three North-eastern states of Adamawa, Borno and Yobe, they were still able to carry out attacks at will in those states.

PREMIUM TIMES reported on many occasions how the Boko Haram sect and its breakaway faction, groups like the Islamic State’s West Africa Province (ISWAP) terrorised the northern parts of the country for more than 10 years.

Apart from the Boko Haram insurgency, in the last four years, there has been a surge in kidnapping and banditry across the country.

More Than 35 Years In Service

The retired Chief of Defense Staff who is the most senior service chief spent about 40 years in service.

He was a member of the 25th regular combatant course.

The 59-year-old general was commissioned as a second lieutenant into the Nigerian army signal corps in 1981.

Until his promotion to a general and subsequent appointment as chief of defence staff in 2015, Mr Olonisakin had spent 34 years in service. He was due for retirement in 2016. All his course mates were retired then.

The most talked about by Nigerians, Tukur Buratai was Born on November 24, 1960.

He was enlisted into the Nigerian Army through the Nigerian Defence Academy on January 3, 1981, as a member of 29 Regular Combatant Course 29 (29 RC).

Going by this, he ought to have retired on January 3, 2016, on completion of 35 years of service.

The former Chief of Air Staff was in service for about 40 years. He joined the Nigerian Air Force as a member of cadet military training course (CMTC 5) in November 1979. He should have been retired after reaching 35 years in service in 2014.

Born in 1960, the retired naval chief is a member of the NDA’s 26 regular course and was commissioned sub-lieutenant of the navy in January 1983.

The youngest of the other service chiefs, he has been in service for about 38 years. He should have been retired in 2018 after reaching 35 years in service.