Senior Special Assistant to the President on Media and Publicity, Garba Shehu, disclosed the number of governors and others, who accompanied the President in a statement. 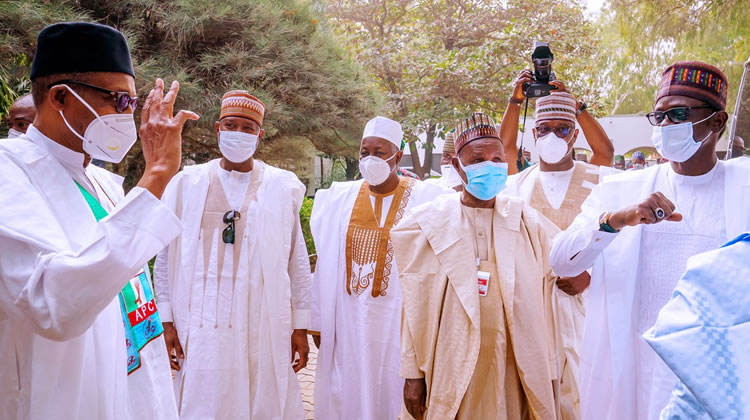 The President, Major General Muhammadu Buhari (retd.) with some of the governors of the All Progressives Congress in Daura. Source: @BashirAhmaad

According to The PUNCH, the Peoples Democratic Party, Nigeria's main opposition party; Yoruba Socio-political group, Afenifere; and some individuals have criticized the decision of 10 governors to visit Daura with Buhari.

They expressed surprise that 10 governors of the All Progressives Congress could abandon their state duties to accompany the President, Major General Muhammadu Buhari (retd.), to revalidate his membership of their party in his hometown, Daura, Katsina State on Saturday.

The President of the Senate, Ahmad Lawan, was also part of the President’s entourage.

Senior Special Assistant to the President on Media and Publicity, Garba Shehu, disclosed the number of governors and others, who accompanied the President in a statement titled “We have nothing to hide, our books will always be open – President Buhari.”

The statement read in part, “The President’s registration exercise in Daura was attended by the Senate President, Ahmad Lawan; former Senate President, Ken Nnamani;  10 governors, including the Governor of Yobe State, Mai Mala Buni, who is the Chairman of the APC Caretaker Committee, and other party stalwarts.”

The PDP described the decision of the governors to accompany the President as the height of irresponsibility.

It also described the trip as a jamboree.

The National Publicity Secretary of the PDP, Kola Ologbondiyan, said this in a telephone interview with one of our correspondents, in Abuja, on Saturday.

Ologbondiyan said, “It is the height of irresponsibility. It beats the imagination that governors would abandon governance at a time of great insecurity and economic turmoil to embark on a jamboree.

“If they devote the kind of energy, they are devoting to chasing shadows in providing actual governance in their states, we will not be having the cases of banditry, kidnapping, armed robbery and other criminal activities which have become the norm rather than the exception today.

“Why would almost 10 governors abandon their states just to witness the president signing a register? When was the last time any of these governors inaugurated a project beneficial to their people?

“In case they are unaware, both the APC and the Buhari brand have been demystified by the woeful performance of this regime.”

Also, Afenifere said the governors merely displayed what it described as their idleness by embarking on the trip.

The National Publicity Secretary of the group, Yinka Odumakin, told one of our correspondents that the governors were not busy in their respective states.

He said, “The governors just displayed their idleness by abandoning their states to accompany the president to go and register for an old party. If they are gainfully engaged, they would not be available for such frivolity.”

Also, a former member of the House of Representative, Dr Junaidu Mohammed, condemned the action of the governors, describing it as irresponsible.

Mohammed also said the APC had failed to show how a truly democratic party should be run.

“For him to go in the company of governors, leaving their states, is clearly irresponsible. It is not proper as they would use our resources, my tax and your tax for the needless trip,” Mohammed added.

On his part, the Executive Chairman, Centre for Anti-Corruption and Open Leadership, Mr Debo Adeniran, said the governors’ action was not only wasteful but also portrayed the government as a wasteful one.

Adeniran said, “In fact, all the ceremony that surrounds the President’s visit to Daura because of the revalidation of his membership of a political party is unnecessary.

“In fact, it could have been a quiet exercise that he could have done quietly without any fanfare. Why the needless trip by 10 governors, who left their states and functions to join such a charade?

“It is a waste of time and resources. Anyway, this is a government of waste, and there are those who benefit from such episodic activities. As long as we continue to tolerate a capitalist system, those are the kind of things they will rub on our faces and there is just too little we can do about it until we decide to change the system.”

Also, the National Secretary of the Coalition for United Political Parties, Peter Ameh, in an interview with one of our correspondents, expressed disgust that at this time with the ravaging coronavirus pandemic, APC governors could still find time to embark on such a trip.

He said such could not happen in any other place in the world.

The CUPP secretary said this was one of the reasons why the country must be restructured.

Ameh said, “This is the joblessness among governors that we are talking about. There is nowhere in the world that this kind of thing happens.

“All this is happening because of the kind of unitary federalism we are operating. It is because governors simply rush to Abuja at the end of the month to share money generated by five or six states.

“Even the America we are copying, at what time did you hear that governors of the Democratic Party are rushing to Washington for this kind of ceremony? What about France or Germany?

“This is happening in Nigeria because the governors know that whatever happens, they will gather in Abuja at the end of the month to collect their allocations, pay salaries and look for the next junket.

“This is why we must restructure so that state governors can sit in their states, generate revenue to develop and pay royalties to the Federal Government.”

In his reaction, the National Chairman of the Action Democratic Party, Yabagi Sani, said it was clear that the APC is “a damaged brand which is out of tune with the realities of what it takes to govern a multi-ethnic and multi-religious nation like Nigeria. “