A ban has been placed on open grazing by the governors of the South East region following the onslaught by herdsmen. 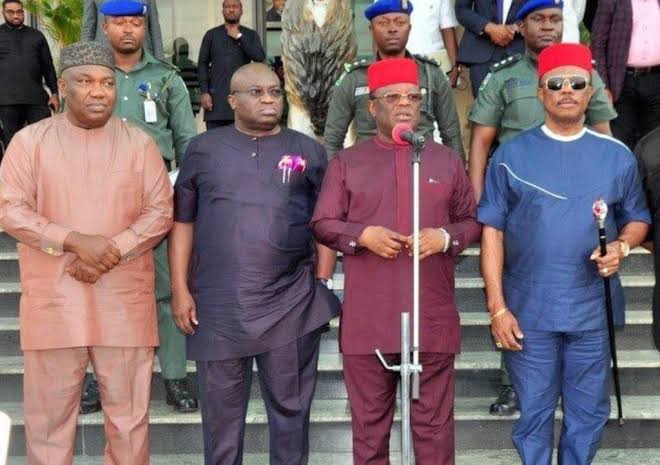 South East governors
The Governors of the South-East have placed a ban on open grazing.
The announcement was made by the Ebonyi State and Chairman Southeast Governors' Forum, David Umahi.
Umahi announced this during an APC stakeholder meeting at the Christian Ecumenical Centre Abakaliki.
The Governor who said the Southeast Governors' Forum had also banned the movement of cows by foot into the zone enjoined leaders to exhibit patriotism in their conduct to guarantee the unity of the Country.
"We are living in a dangerous time, without patriotism to our nation Nigeria, it is very difficult to have a peaceful time"
He called on leaders and stakeholders of the zone to speak up and desist from playing politics with the Security of the zone and nation.
"Governors of South East have been calling on our leaders to speak out on the Security of the zone and unity of Nigeria, I read on paper where someone said he was giving Governors of South East 7-days to ban open grazing, the Governors of southeast had banned open grazing and movement of cows by foot into South East, in each of States of the South East, we are managing ourselves well, what we discuss with the herdsmen is the system in place for a long time"
The Chairman of the southeast Governors' Forum cautioned people of the zone against instigating crises in the country through the dissemination of fake videos alleging killing of Fulanis by IPOB in the South East.
"What our people must know is that Security is not political, what is demanded of the leaders is to put up programs that favors the people and foster national unity"
Gov. Umahi announced his support for the call to flush out criminal elements from forests across the nation to boost the security of the country.
"In our forests today, we have the kidnappers, herdsmen, cultists, all sorts of criminals, anybody staying in the forest is taking a risk, when we say that people should move out of the forests, it is for their safety and security, so I support that kidnappers, herdsmen, cultists, and bandits should be flushed out of our forests"
The Governor used the occasion to officially flag off the APC Revalidation and Registration Committee and charged the Caretaker Committees to ensure the successful conduct of the exercise.
He thanked stakeholders of the party for attending the meeting and observing the COVID19 protocol, insisting that the State remains APC.
"Let me thank our leaders for their commitment to the welfare of our party; Ebonyi State is complete and Ebonyi State is APC"
Earlier, the Acting Chairman of APC in the State, Chief Stanley Emegha said the meeting was convened to find a way of upgrading the membership of the party in the State and called on the stakeholders to support the exercise to fully reintegrate the State to the next level.
"We have made it clear that Ebonyi is APC and the National will be expecting us to prove it, proving it is by us coming out and participating in the exercise massively, make whatever sacrifice to the betterment of the State because we must use the exercise to prove a point that Ebonyi State is APC and APC is Ebonyi State"
Inaugurating the State and Local Government Area Caretaker Committee members of the exercise, the Chairman of the exercise in Ebonyi State, Chief Chima Onyekwere expressed hope that the exercise of membership Revalidation and Registration would produce an Igbo President in 2023.
He appealed to Local Government Chairmen to collaborate with the Caretaker Committees to ensure the success of the exercise in their areas.
Highlights of the meeting were the adoption of Local Government Area nominees for Federal Board appointments and empowerment among others.
Top Stories