The two, according to facts given to a Takoradi High Court on Wednesday, February 3, 2021, engaged in a quarrel. 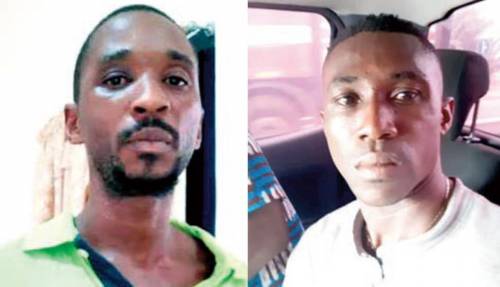 According to SaharaReporters, some fresh details have emerged of a conversation between two Nigerians currently standing trial for the kidnapping and murder of four girls in Takoradi, Ghana some two years ago.

The two, according to facts given to a Takoradi High Court on Wednesday, February 3, 2021, engaged in a quarrel.

The second accused person, John Oji, was asked by the first accused person, Samuel Udoetek Wills, to desist shouting on top of his voice because he had killed someone in his room.

The two Nigerian citizens, Samuel Udoetuk Wills and John Oji, are standing trial for the kidnapping and the subsequent murder of the Takoradi missing girls.

The victims—Ruth Love Quayson, Priscilla Blessing Bentum, Priscilla Mantebea Koranchie and Ruth Abekah—were believed to have been kidnapped between August 2018 and January 2019.

Ghana Police Service through investigations established that some skeletal remains found in the compound of the first accused person were that of the Takoradi missing girls.

Chief State Attorney, Patience Klinogo, said details of the fight between the two and the conversation that ensued was contained in a statement that the second accused person, John Oji, gave to the police as part of investigations into the case.

Daily Guide reports that the Chief State Attorney during her cross-examination of the second accused person who had opened his defence asked, "When you visited the first accused in December 2018, a quarrel ensued between the two of you and you started shouting but the first accused person asked you not to make noise and be shouting because he had killed someone. That is in your statement and you signed?"

Her question was responded with "this is my statement but not my sentence."

The Chief State Attorney then stated that "I am putting it to you that you gave that information voluntarily to the police," but Mr. Oji retorted "I disagree with that."

The second accused then explained that after he was arrested, he was asked how many girls had gone missing and he said he was told they were three. "I never added that Mr. Wills knew their whereabouts," he added.

His answer was then followed with another question, "So why did you visit him?" John Oji said that Mr. Wills is his childhood friend and that he visited him in Ghana because Mr. Wills promised to get him a job in Ghana.

The accused person said his childhood friend told him he was working with a construction company in Ghana and promised to get him a job with the company as a public relations officer.

It was then put to him by the Attorney that he visited Mr. Wills in Takoradi and was later sent to Tamale – all to pursue their kidnapping agenda, but Mr. Oji disagreed with the prosecutor.

The second accused person earlier in his evidence led by his counsel from the Ghana Legal Aid, Mark Bosia, told the court that he was arrested at the border between Togo and Ghana on June 4, 2019, and that he was lured by some security personnel to travel from Nigeria to the Togo border. He indicated that he was told he had been arrested for kidnapping.