The officer was arrested for allegedly supplying 1,000 cartons of beer to a beer dealer in the state. 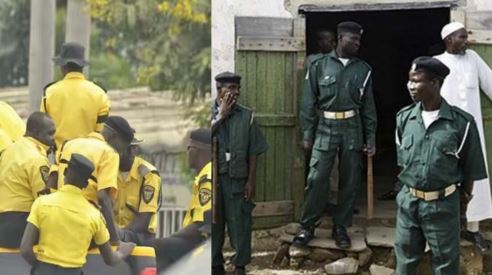 A source told SaharaReporters that the police officer, popularly known as OC Gulder, is a Christian who manages the police mess at Panshekara, Mopol 52 in the Sharada area of the state.

According to the source, OC Gulder usually goes to Sabon Gari town to buy beer and other things to sell at the police mess he manages.

He said the KAROTA had trailed the officer to the town and arrested him after which they handed him over to Hisbah for allegedly supplying 1,000 cartons of beer to a beer dealer in the state.

The source said, "He was not there to supply beer; he only comes to town to buy and resell. He is a Christian, he has the liberty to buy and drink beer. I suspect other officers in the station hate him because he manages police mess at Mopol 52 in Sharada area of Kano state.

"He's an inspector for that matter. We call him OC Gulder. Last Saturday, he came into town again. We have a state police called KAROTA, under Gwangwashu, there's another one called Hisbah, also under the state but the Nigeria Police Force is superior to them. This officer was coming with a police vehicle and KAROTA stopped him, he did not stop because he is an officer.

"Then they followed him and accused him of using a police vehicle to supply beer, he told them he was a police officer. These KAROTA officers arrested the police officer and took him to one police station along Sabon Gari. They came with 4 hilux buses, armed. Then they went to report to Hisbah that the officer was bringing beer to Kano, that they were stopping him and he didn't stop.

"They said he wanted to spoil their religion. Hisbah then gave the order, and packed over 1,000 cartons of beer bottles from one Obinna's shop in Sabon Gari. They did this to implicate the police officer. They said it was the police officer that brought beer for the young man but he told them he had only come to purchase beer. But it was already late, it was around 1am.

"Now, Obinna said when the officer called him, he told the officer he had closed but the officer said because of his police work, he would be on duty and that time was the only time he had to go to Obinna's shop to make his purchase. Obinna is from Enugu State.

"The police officer is still locked up in their cell."