In a recent article, a presidential aide, Femi Adesina has opened up on how President Muhammadu Buhari welcomed a 'total idiot' to Aso Rock. 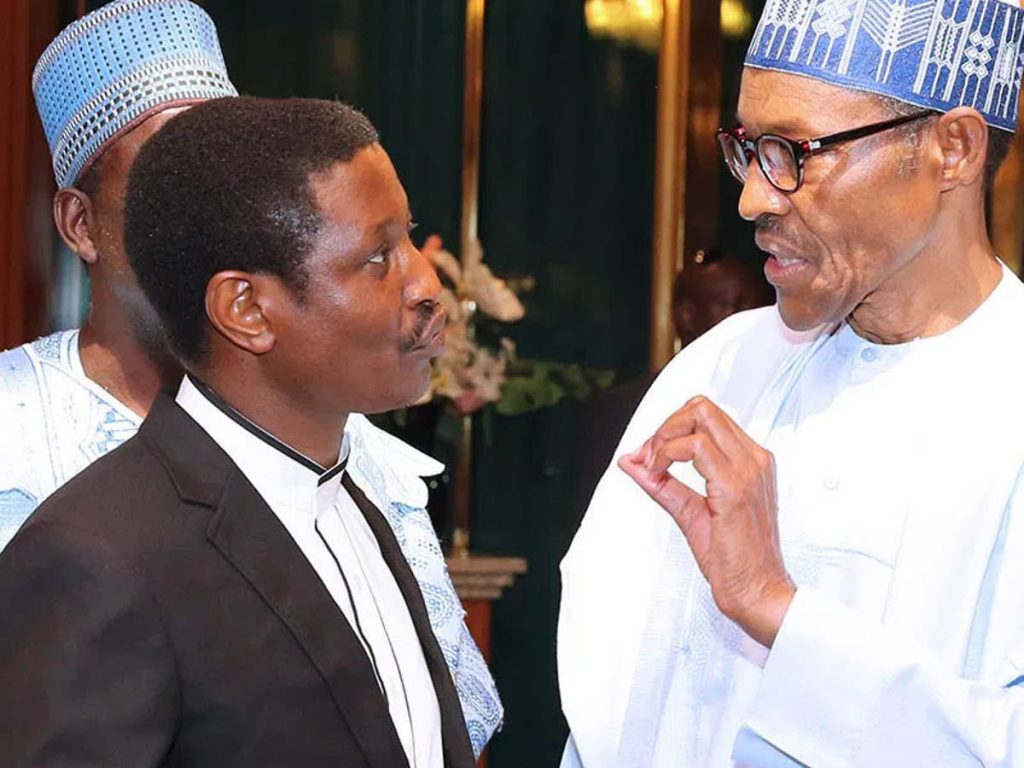 Yakubu Pam and President Muhammadu Buhari
A presidential aide has shared an insight into how Nigeria's President Muhammadu Buhari welcomed a clergy man tagged 'a total idiot' to Aso Rock.
While trying to show that his principal is not a religious bigot, Femi Adesina, the Special Adviser to President Muhammadu Buhari on Media and Publicity, said his principal recently received the former Chairman of Christan Association of Nigeria (CAN) Plateau State Chapter, Rev Yakubu Pam who was described as “a total idiot” by the former president, Olusegun Mathew Obasanjo.
Adesina said Buhari who is of another religion was able to receive the cleric with dignity he deserved, stressing that “for a Matthew to call a priest an idiot, “a total idiot?” Not acceptable by any stretch of the imagination”.
The president’s spokesman who made the remark on Friday in a statement titled “THE PRIEST AND THE PRESIDENT”, said “What Rev Pam didn’t get from a Christian, he got from a Fulani man from Daura, a Muslim. Is there any lesson we can learn from this? Think about it”.
Recall that in May 2004 when fury and hatred were unleashed in Yelwa-Shendam, Plateau State, leading to internecine bloodbath as hundreds of people were killed along religious lines, the then president, Obasanjo accused Rev Pam of inciting violence via preaching.
“What role have you played to bring about peace as CAN Chairman in Plateau State? CAN, my foot! What kind of CAN Chairman are you? Did your own Christianity teach you about revenge? You are an idiot. A total idiot. And I have no apologies for that”, Adesina quoted Obasanjo as saying then.
According to Adesina, Pam who is now the Executive Secretary of the Nigerian Christian Pilgrim Commission (NCPC), is a man of peace who followed the right part by not retaliating against the former president.
The statement reads in part: “Rev Pam is obviously a man of peace. That was why “when he was reviled, he reviled not again; when he suffered, he threatened not; but committed himself to him that judgeth righteously.” (1 Peter 2:23).
“How many of us would be called an idiot, “a total idiot” publicly, and would not talk back? How many of our modern day preachers, who arrogate all sorts of powers and authorities to themselves, would not have cursed Obasanjo publicly, asking him to apologize or be killed by God within seven days? (You know, some of these modern preachers speak as if God was their personal property, who they can command and order around).
“I tell you, this Rev Pam, from Gyel, Jos South Local Government Area of Plateau State is a reconciliator, a peace advocate, and that is why God has lifted him up today. And not through a Matthew, but a Muhammadu, one against whom all lies under the sun have been told: he’s a religious bigot. A herdsman. A nepotist. Jihadist. Everything.
“May God forgive those who condemn the person they don’t know, and have refused to know.
“President Buhari personally congratulated Rev Pam on his appointment as NCPC boss. He encouraged him to continue with his peace building efforts across the country, stressing that no enduring development could be possible without peace”.
Top Stories