The woman said Emmanuel was arrested initially over a short video he posted on social media of himself freestyling while in army uniform. 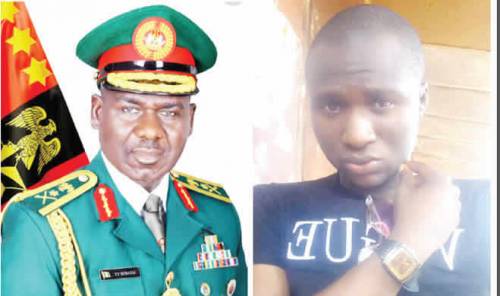 A Nigerian woman identified as Helen Odaudu who happens to be the mother of Emmanuel Odaudu, an ex-military man detained illegally by the Nigerian Army since June 12, 2020, has cried out.

According to her, life without her son has become unbearable.

Helen, who spoke with SaharaReporters on Thursday, described the young man's prolonged detention as suspicious because he had been dismissed already for the offence he is being detained for.

She said Emmanuel was arrested initially over a short video he posted on social media of himself freestyling while in army uniform.

The videos, some of which went viral, reportedly infuriated the military authorities, leading to his arrest and detention for three months while he was still a soldier.

Helen said her son was later released, but told he would be redeployed to Maiduguri over the matter.

However, while waiting for his redeployment, Emmanuel was dismissed by the Commanding Officer, 29 Battalion Nigerian Army, Bori Camp, Port Harcourt, over another video he made months before his detention.

The video, according to her, showed Emmanuel in uniform advising people to get their permanent voter cards to vote for good governance.

She said her son called her to inform her that he had made a grievous mistake by making the video but had deleted it. The video of him later resurfaced after being shared by singer, Charles Chukwuemeka Oputa, popularly known as Charly Boy.

She said, "Emmanuel had initially done a video of himself rapping and he was locked up for three months because of that. They said they would redeploy him to Maiduguri but all of a sudden, they came and rearrested him.

"They said they saw a post of him and Charly Boy. I don't know if it was Charly Boy that posted that but my son confessed to me that there was a time when Rivers State was having a governorship election and he did a video in which he urged people to go and get their PVCs; he did the video while in military uniform. He called me and said Mama, I have done something bad.

"I asked him what he did and he said he videoed himself and released but he told me he deleted it immediately. I said you've done something very bad. You know the military does not take things like this lightly. Truly, after some months, they started his case; they started with the one in which he was rapping.

"I don't know if it was Charly Boy that got hold of the video my son had already deleted, I don't know who now reposted the video. They didn't even arrest him based on the video but charged him based on a picture posted online, of him and Charly Boy. I think it was edited. He didn't take any pictures with Charly Boy. Now, they feel my son had something to do with politics. He was immediately dismissed. There was no investigation, nothing.

"After his dismissal on October 5, 2017, because of a post he knew nothing about, I told him to come home and he did."

Helen said her son was going about his normal life when the military tracked him to Otukpo, Benue State, on June 12, 2020, on the allegation that he impersonated the Army in another video seen on social media.

The military was said to have ordered his arrest over it.

"What happened was, after a year, Facebook brought back the rap video he did that time, which it does annually with Facebook Memories. That's how they traced him to my hometown to pick him up. They said he was already a civilian but impersonating a soldier.

"For over a month, we didn't know where they took him to. They told us nothing. I asked my husband if they were real military men because they just arrested him without saying this is where they are taking him to. They didn't say anything to the family. I didn't hear from my son till after 2 months. I went to all the military barracks I could go to, they said they didn't see him, they said they didn't make any arrest.

"I nearly died, then when it was almost two months, he called. I asked him where they took him to, he said they took him to one underground cell in Port Harcourt. They locked him up, they handcuffed my son like some criminal, blindfolded him, and took him to Abuja.

"He's at SIB (Special Intelligence Bureau) underground cell in Abuja now but my question is, what has my son done to the Nigerian Army? If it was about the video he posted, he has already paid for it with his dismissal from service. Did he kill somebody? Did he steal from somebody? What does the Nigerian Army want? He has spent eight months now with them?"

Helen alleged that the military always claimed her son's case was being investigated but that he had never been questioned for once since he was arrested.

She said the last time she saw her son was on November 7, 2020, but now speaks to him on the phone once a month.

"I went to see my son on November 7, 2020. Now, we only talk on the phone and they don't allow them to call regularly. I spoke with him on Tuesday after many months. They keep saying they are investigating. They've never brought him out one day to ask him questions, they just locked him up. I thought when someone is accused of something, he should be the first witness in his case.

"What worries is that he is no longer in the army, so why are they keeping him? Assuming he was still in the army, I wouldn't have been worried. This is my pain. I am a mother, if someone did this to them, I'm sure their mother wouldn't have survived what I suffered.

"My son is no longer an officer; whatever his offence is, why can’t they hand him over to the police for trial in a conventional court? I come from the barracks, the army doesn’t arrest and keep civilians in detention for more than 24 hours, why is my son’s case different?

"When I went to the cell where he's being detained, the people there said they were not the ones handling the case, that he was just brought and locked up there. They said the intelligence unit was investigating him.

"Those that know my son know him to be very humble and caring. When he got caught up in this issue, people were crying because they love him."

She called on civil organisations, human rights groups and lawyers, pressure groups, and well-meaning individuals to help her get justice for her son.

"My son is a fine young man that the Nigerian Army wants to waste like that. Please help us. We have nobody, we don't know who to cry to," she told SaharaReporters.