Nigerians have mocked the Nigeria police on social media after it offered to pay informants N10 million. 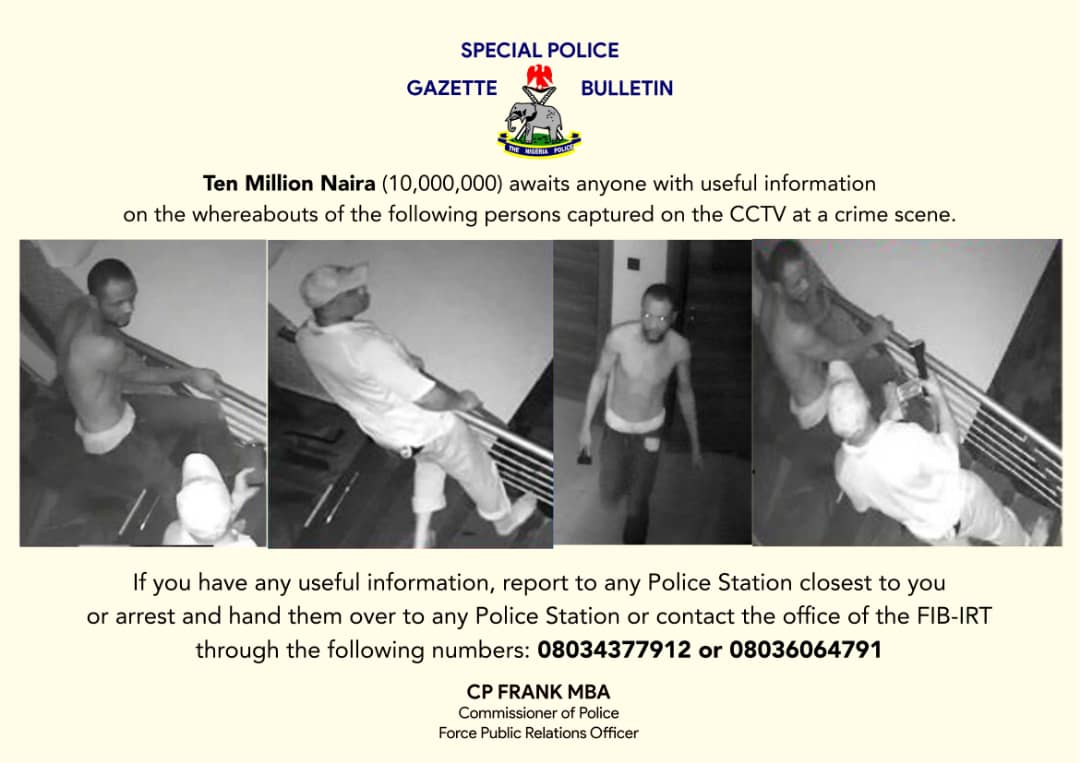 The suspects declared wanted by the police
Nigerians took to Twitter yesterday to mock the Nigeria police after it annoucned N10 million as reward for anyone who can help it identify suspects in a CCTV footage.
Instead of helping the police, Nigerians lambasted the government establishment accusing them of incompetence.
Many claimed that the police cannot be trusted and don't have any N10 million to give informants.
The police had shared the post on its official Twitter page on Thursday, February 4.
The bulletin contained the still pictures of two suspects who were captured by the CCTV at a crime scene.
According to the police, citizens who intend to report the incident can visit the closest police station for that purpose.
The police also said Nigerians who are capable of arresting the suspects can do so and hand them over to the nearest police station.
The authorities further disclosed numbers citizens who want to share information can call.
See reactions below:
@@VictorIsrael_:
You could Locate Shola
You could locate Sowore
You could locate Akuma Solomon
You could Locate Eroms
You could locate #EndSARS protesters
Why’s this different? Okay! Infact we the coconut head Youths would add more money to the 10 million, Find them the same way you found others
@HenryUfomba:
From all the threads here one will see a Police Force that lacks trust among the populace. It's too bad that the NPF over the years has reduced itself to this level. Just too bad. It's true that NPF needs info to work, but it is also true the citizens don't trust it either.
@@VictorIsrael_:
Mr Police, let’s even forget about the fact that the Pictures are blurry, please eh what is their Crime? So that incase I see them I’ll ask them if it’s true. We’ve always been thought to hear from both sides.
@AYEBANENGIYEF13: Hahahahahhhah Rolling on the floor laughingRolling on the floor laughingRolling on the floor laughingRolling on the floor laughing Nigerian youth with coconut head , me too I go ask them how dem waka way there matter cast Face with tears of joyFace with tears of joyFace with tears of joy.... no p I go Dey find dem wit touch light mtcheew Chebi if na endears prostesters una go fit locate dem Pouting face ode
@FaruqBashar: Scenes when you provide them with the information and they arrest you too saying you’re an accomplice because they don’t want to pay Face with tears of joyFace with tears of joy
@VictorIsrael_said:
We did Data and Image Capturing during Registration for Voters card, Drivers License, NIN, JAMB, and BVN. Take these images, get matching pictures and streamline your search them share the Non-existent 10 million amongst yourselves and most importantly buy new vans!
@layilawal1 said:
You have all our data, bvn, finger print, passport photograph, nin and you’re still giving ten million to the public to look for someone with only picture that is not even clear.
Another group said they want upfront payment before they provide assistance to the police on the issue.
@Hustle40592932 said:
''I personally know de guy,but before i tell anybody, you will first and waya me half of de money which is 5m.''
Christopher Sunny @ituma2496 said:
Pay advance of 5m then when the job is done you pay the balance. If you are OK with that then we start the search forthwith. The last I will trust in business is the Nigerian police. Wayoo na their nickname.''
Another set of users expressed doubt that the police will pay the promised reward .
Assey Nail polish @hotplantain_said:
Anybody that will give police the information of the whereabouts of these people hoping to get 10million will be very stupid. Better avoid the trap.''
@Majorchris4 said:
So police will just put up pictures and ask us to provide the person without an reason why Face with tears of joy. Una Mumu Don enter Pro."

Ten Million Naira (#10,000.000.00) awaits anyone with useful information on the whereabouts of the persons in the photo below; pic.twitter.com/kdn11uYbqY