Bayern Munich outclassed their Mexican opponent, Tigres to emerge champion of the world in Qatar. 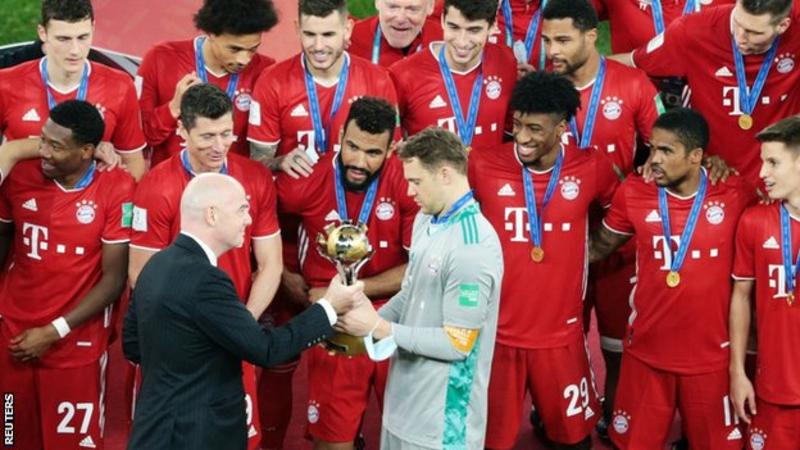 Bayern wins sixth trophy
Bayern Munich claimed their sixth trophy under nine months after winning the Fifa Club World Cup final yesterday.
BBC Sports reported that Benjamin Pavard scored the only goal of the match to earn his team a deserved victory over Mexican club, Tigres in Qatar.
Bayern have won the Uefa Super Cup, German Super Cup and are now world champions, to complete a clean sweep of trophies after last season's Treble.
Pavard's goal was initially ruled out for a Robert Lewandowski offside but given after VAR consultation.
Joshua Kimmich had earlier had a goal disallowed by the VAR.
This is the eighth year in a row that a European club has won the Fifa Club World Cup, including Liverpool last season.
Tigres of Mexico were the first team from North or Central America to reach the final but could not end the dominance of European and South American teams in the tournament.
Former France striker Andre-Pierre Gignac failed to add to his three goals in Qatar, although still won the Golden Boot.
Al Ahly of Egypt beat Brazilian club Palmeiras to clinch third place.
Former Bayern Munich boss Pep Guardiola, now the Manchester City manager, recorded a video congratulating his old team.
"Big congratulations to the whole Bayern family for this incredible success. To be the club world champions and to win six out of six titles - I am so proud," he said.
"I would like to say to Hansi [Bayern boss Flick] you are the second team to win six in a row. Before it was Barcelona [in 2009 under Guardiola]. Maybe I can call Messi and company and we can play for the seventh title. Tell me when and where."
Qatar was hosting the tournament, which is being viewed a trial run for next year's World Cup. A limited amount of fans were allowed to watch at the Education City Stadium in Al Rayyan.
The victory cemented Bayern's status as the outstanding club team of 2020 - the Club World Cup was meant to be in December but delayed because of Covid.
Since Flick took over in November 2019, they have won 58 out of 68 games - and lifted a trophy every 11.3 games.
They deserved their victory over Tigres, despite being far from their best.
Kimmich had a goal controversially ruled out by the VAR in the first half because Lewandowski - who did not touch the ball - was in an offside position and adjudged to have distracted the goalkeeper.
Lewandowski was flagged offside when his header was saved in the second half but Pavard's half-volley into an empty net was allowed to stand after VAR consultation.
Leroy Sane hammered a shot off the angle of post and bar, and Corentin Tolisso had a shot tipped on to the post as they could have won by more.
Top Stories