To show that Gorilla Glue saga was not as serious as she was trying to make it, Len Martin recorded himself on Facebook, applying the adhesive to a red solo cup and attaching it to his lip. 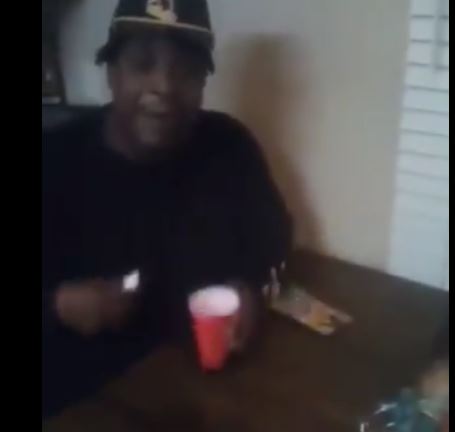 Len Martin, a man who claimed Tessica Brown made up the Gorilla Glue hair saga has ended up in the ER after he glued a plastic cup to his lip using the same glue.

Brown went viral after she published a TikTok video complaining that her hair was stiff as a board after using Gorilla Glue adhesive spray as holding hairspray.

Reports have it that she spent 22 hours in the emergency room at St. Bernard Parish Hospital, in Chalmette, Louisiana, where staff used acetone, the ingredient in nail polish remover, in a failed attempt to remove the superglue.

According to reports, the staff put acetone on the back of her head, but it burned her scalp and only made the glue gooey before hardening back up.

The lady flew to Bev Hills for a surgery with plastic surgeon Dr. Michael Obeng, who offered to do the $12,500 procedure for free.

According to reports, the lady was relieved after the four hours surgery was done and was under a light anesthesia during the procedure.

In an effort to show that Gorilla Glue was “not as serious as she was trying to make it,” Len Martin, 37, recorded himself on Facebook, applying the adhesive to a red solo cup and attaching it to his lip, believing that all he needed to do was lick it off.

Instead, Martin, too, ended up in the emergency room where a doctor used a “painful peeling” method to remove the cup from his lip, according to WKBN.

“Everyone is on social media, every day there is a new challenge, but I did not think it would go this far,” Martin told the outlet.

“I thought that chick with the gorilla glue was making that story up,” he captioned the Instagram video. “But no..its real… I don’t kno why I tried it..now they talking bout cutting the tip of my lips off in surgery…yall pray for me.”

Man who accused Tessica Brown of lying when she used Gorilla Glue on her hair, ends up in emergency room after he glued a plastic cup to his lip. pic.twitter.com/zwiymOtZFV