Following the failure of the coup, Dimka and his co-conspirators were declared wanted by the military authorities. 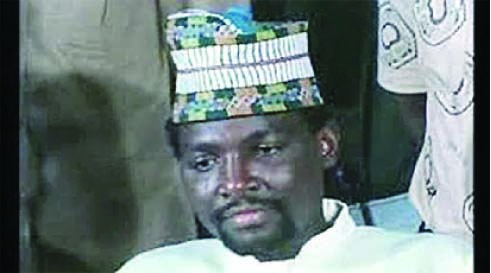 Sun News recaptures the fall of Buka Suka Dimka who played a leading role in the 13 February 1976 abortive military coup against the government of General Murtala Ramat Mohammed.

“Good morning fellow Nigerians, this is Lt. Col Bukar Sukar Dimka of the Nigeria Army calling. I bring you good tidings. Murtala Muhammed’s hypocrisy has been detected. His government is now overthrown by the Young Revolutionaries. All the Nigeria military governors have no powers over the states they now govern. The state affairs will be run by the military brigade commanders until further notice. All commissioners are sacked except for the armed forces and police commissioners who will be deployed. All senior officers should remain calm in their respective posts. No divisional commander will issue orders to his formations until further notice. Any attempt to foil this plan from any quarter will be met with death. You are warned, it is all over the 19 states. All acts of … (word unclear) observed will be death. Everyone should be calm. Please stay by your radios for further announcements. All borders, airports and seaports are closed until further notice. Curfew is imposed as from 6am to 6pm. Thank you. We are all together.”

These were the words of Bukar Sukar Dimka of the Nigeria Army Physical Training Corps, representing those he called the Young Revolutionaries, as they attempted to take over the General Murtala Mohammed-led military regime. Although the attempted coup failed, Mohammed, his ADC, Lt. Akintunde Akinsehinwa, and driver were killed.

A volley of bullets were sprayed on Muhammed’s official Mercedez Benz car near a petrol station, opposite the Federal Secretariat, Ikoyi, Lagos. Dateline: Friday, February 13, 1976.

Following the failure of the coup, Dimka and his co-conspirators were declared wanted by the military authorities. Intermittently, the radio gave information about the fugitives.

March 4, 1976 began like a normal day in Amachi, Afikpo, Ebonyi State. (Afikpo was in Imo State then). However, before the sun went to bed, things began to change in an extraordinary way.

In the evening of that day, a white Renault car with registration number ECC 6253 entered the premises of Ikenyi Friendship Hotel in Afikpo. The front number plate was dangling.

The sole occupant was a well-built man in his mid 30s, five feet six-inch tall with one deep tribal mark on each cheek. He wore a traditional robe.
The young man approached the hotel staff and asked to be shown around before checking in. He was taken to all the rooms in the hotel, which was a bungalow at the time. Finally, the man chose a room at the back of the building. Interestingly, the room had a special feature: It had no burglar proof; other rooms had.

Subsequently, the guest checked in as Mr C. Godwin, an official of the Federal Ministry of Agriculture, Enugu.

A staff of the hotel, Ogbonnaya Nwaogwu, who was about 20-years-old at the time, told the reporter: “After checking in, the man made a request. He asked for a woman to spend the night with. So, a woman was brought for him from a brothel around. But when he saw the lady, he said he did not want an ashawo (prostitute). We wondered how he knew that the lady was an ashawo; after all ashawo is not written on anybody’s face. When the woman came out, she said that he had been to their place (hotel) before and played with the ladies there. I think he must have also noticed the woman with others there.

“So, when he rejected the first girl, we went to a neighbouring village, Ukpa, and brought another girl for him. He didn’t complain about the girl and he shut the door when the girl entered into his room. Her name was Beatrice Ugochi.

“Some of us who were here did not know Dimka in person. All we knew was that there was a coup, but some people in Afikpo knew Dimka. That was the problem.

“When he came to Afikpo, some people recognized him. So, they reported to the police that they had seen someone who looked like Dimka. You know, you cannot just go there and say you have seen Dimka just like that.

“Not long after, security men stormed the hotel, saying that they wanted to know the people who were lodging in the hotel. We told them that we were having only one guest and they asked if he was Dimka. We told them that the guest was an agric officer from Enugu. They insisted on seeing the guest.

“When the officers insisted on seeing our guest, Mr Godwin, we went and knocked on his door. When the lodger asked who was knocking, he was told that some people wanted to see him. The lodger said that he would he would come and see the visitors shortly, explaining that he was having a shower. They waited for him for some time but he didn’t come out. The officers surrounded the building and some went and knocked on his door.

“After waiting without answer, the officers forced the door open and found Ugochi sitting on the bed. The men asked her about the man she was supposed to be with and she pointed to the bathroom.

It was later discovered that the guest escaped through the bathroom window, which had no protector. The suspicion that the lodger, Mr C. Godwin and Dimka were the same person became more profound. Then the officers started beating the girl.

The disappearance of the lodger threw the security agents into confusion and panic. According to a witness, “the security agents began to sweat profusely. They painted pathetic pictures as they searched all over the place, looking for the escapee lodger who slipped through their fingers, and abandoned his gateway car loaded with cash. They didn’t know how long he had been gone or the route he took. In fact, they all looked stupid. Dimka had outsmarted them.”

The security men unleashed their anger and frustration on Ugochi, beating and battering her like a thief. They took her and the hotel manager to the police station and later transferred them to Owerri.

Dimka’s physical ability was deployed when it mattered most. While the men pursuing Dimka were chasing shadows in Afikpo, he walked away through the bush behind the hotel at the time. He walked in the bush all through the night for several kilometers. The bubble, however, burst at Abaomege, near Abakaliki.

Dimka’s plan was to enter Cameroun through neighbouring Cross River State. Investigation revealed that during the Ngeria/Biafra civil war, Dimka had operated in Afikpo, so he was conversant with the area.

Victim of the flesh

Dimka gave himself away by frolicking with women of easy virtues at a nearby brothel before checking into Ikenyi Friendship Hotel. While there, some people had noticed him and reported to the local police. But before the security personnel arrived, he had gone. They finally traced him to Ikenyi Friendship Hotel. Anyway, Dimka was just being himself. While appealing for information on his whereabouts, the police had noted that, “he drinks and he is fond of pub houses.”

The Federal Government, on March 6, 1976, issued a statement regarding Dimka’s arrest. The statement said: “His arrest followed a massive manhunt operation mounted by a combined team of the army and police in the area.

“The previous day, Lt. Col. Dimka had checked into a local hotel in Afikpo under the name of Mr C. Godwin of the Federal Ministry of Agriculture, Enugu. Later, on his request, the hotel manager secured for him a girl, Miss Beatrice (Ugochi) Agboti, with whom to spend the night.

“A few hours later, the local police security was alerted and they closed up on him. At about 10.30pm, he bolted away through the toilet of his hotel room into a nearby thick bush, abandoning his car with a dandling registration number ECC 6253.

“The continuous joint manhunt operation by the army and police resulted in his subsequent arrest near Abakaliki.”

And the man died

Dimka was tried and convicted by a military tribunal. On Saturday, May 15, 1976, he and six others, including the former governor of Benue Plateau State, Joseph D. Gomwalk, were executed by firing squad.

Thirty-two others had earlier been executed on March 11, 1976, for their alleged roles in the events of February 13. They included the federal commissioner for defence, Maj. Gen. Illiya Bisalla, who had attended the burial of the slain Head of State in Kano. He had maintained his innocence even as he was being tied to the stake, saying: “I am going to heaven. I need no prayer any longer.”

After Dimka’s execution, Obasanjo made a nationwide broadcast, saying: “We have now substantially disposed off the major issues arising from the coup attempt.”