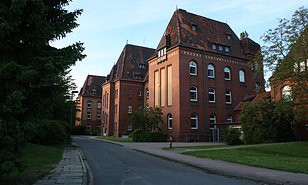 The horrific story has been told of a 21-year-old psychiatric patient who killed fellow patients.

The man was accused of killing two fellow patients and attacking two female nurses and a police officer at a German hospital.

The man who admitted himself to the psychiatric clinic in the northern town of Lüneburg, near Hamburg, on Thursday, February 18, allegedly attacked two older male patients, aged 54 and 56, on Friday night at 2am and murdered them.

He then attacked the nursing staff and injured two female nurses, aged 42 and 61, and a police officer, Lueneburg police spokesperson Antje Freudenberg said.

According to local newspaper Die Lippische Landes-Zeitung, several police officers rushed to the Lüneburg Psychiatric Clinic and when they approached the suspect he allegedly threw objects at them, injuring one officer.

The police said they used pepper spray to subdue and arrest him.

Police say the suspect strangled the 54-year-old man to death while the older patient was rushed to hospital where he died as a result of his injuries.

The suspect remains in custody and the investigation is ongoing.