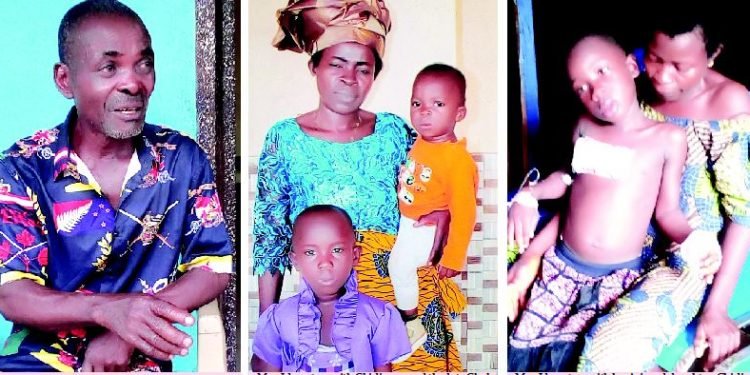 The story has been told of a Nigerian boy who was killed by suspected kidnappers in Imo State.

The family of Idamatam of Isieke village, Awo Omamma Community in Oru East Local Government Area of Imo State is yet to recover from the killing of Paschal Chukwueloka Idamatam, a three-year-old boy, by suspected kidnappers who invaded the Afor Awo Omamma Market, DAMIAN DURUIHEOMA reports.

Gloom has enveloped the family of Idamatam of Isieke village, Awo Omamma Community in Oru East Local Government Area of Imo State following the killing of Paschal Chukwueloka Idamatam, a three-year-old boy by kidnappers who invaded the Afor Awo Omamma Market in search of their runaway member.

The Idamatam’s family house on Awo Omamma -Okwudor Road and Life Hospital and Maternity, Awo Omamma on Owerri-Onitsha Road, where the wounded girl is receiving medical attention, have since turned into a Mecca of a sort with sympathisers of all kinds trooping in to commiserate with the household.

The late Chukwueloka and Chidimma were brought to the market from their school, St. Patrick’s School, by their mother, who is a groundnut seller in the Afor Awo Market on Wednesday, February 3, 2021, when the incident happened.

Apart from Chukwueloka, a motorcycle spare parts dealer, known as Emeka, was also killed in the invasion, while several persons sustained different degrees of gunshot wounds and injuries from the stampede, as the hoodlums shot consistently while chasing a man known as Orjiwuagu, believed to be their gang member.

Orjiwuagu was said to have run away with the gang’s millions of naira made from a ransom collected from one of their hostages.

His gang members, however, traced him to the village where he had already started building a mansion, bought a Lexus car and living large in the village.

It was in their attempt to get Orjiwuagu that he abandoned his car and jumped into the market as a cover, while his angry assailants shot severally into the market, killing Chukwueloka and injuring his sister.

Father of the murdered boy, Mr. Paul Idamatam, said he was still in disbelief over the gruesome killing of his three-year-old only son by the kidnappers.

Idamatam, a bus driver, who just buried his late mother on January 13, 2021, cried that death should have taken him instead of his only son.

He said: “Paschal Chukwueloka Idamatam is my only son that was killed last week Wednesday during the invasion of kidnappers at Afor Awo Omamma. He was a Nursery 1 kid at St. Patrick’s School, Isieke, Awo Omamma while his elder sister, Chidimma, is a six years old pupil of the same school. She was shot on her chest and left hand. Chidimma is currently in the hospital with her mother.”

The 65-year-old man continued: “I faced and battled childbearing challenges all my life. I married four wives at different times. They all ran away because they could not bear me children. My first wife gave birth to one child who died after some years without her bearing another baby. She decided to leave.

“My three other wives also left because they could not bear children. But this one, Ebere, stayed and since then we have been able to give birth to two children – a girl and a boy, who was just killed by hoodlums.

“My wife is a groundnut seller in the market at Afor Awo. She had just brought the kids from school and moments later, they started hearing consistent gunshots while people were running towards her stall in the market. It happened that some young men were chasing another young man and shooting at him while pursuing him. We later found out that a boy from Ubachima, known as Orjiwuagu, was the one they were chasing over their money that one is holding. They chased him from Ubachima Village to Isieke here into the Afor Market

On whether the people of the community know the shooters, Idamatam said: “The only person people know is the one being pursued. I don’t know his real name but people call him, ‘Orjiwuagu’ from Umuifa, Ubachima Awo Omamma. I also learned that he recently returned from prison after staying for seven years.”

The distraught father described his son as a lively boy, who at the age of three was already exhibiting engineering traits.

“Chukwueloka was full of life. He was such a lovely boy that everyone wanted to play with. He was never a problem for anyone who came around him. He was such a child that would be at home and everyone would know that a child is here. His birth and that of his elder sister brought life back to me as a person and my household. I’m really devastated over his death. He was naturally wise and intelligent to the extent that he would not eat anything from anybody without telling me. Death should have taken me instead of my only son

“I started calling him an engineer in my mind because of the deft moves of his fingers whenever he saw anything. He always tried to spoil and repair things. He never stayed long outside my compound.

“That day I didn’t go to work. I was at home here when my wife took him and his sister to school. Before they left, he told me to give his mom money for biscuits for them which I did. I never knew that was his last day,” Idamatam said amidst sobs.

Though the police had asked him to discontinue the matter, Idamatam is still demanding justice for his innocent son and her injured daughter, insisting that the police should do their best to fish out the perpetrators.

He said: “Though the police requested that I make a statement and signing that I would not pursue the matter anymore. My brothers in Lagos also called to advise that I should not pursue the matter. So, that is why I signed that we don’t want a case anymore. The corpse of my late son was therefore released to me to bury. But, in spite of that, I will want the police and government to fish out the killers of my son.”

Idamatam disclosed that more than one week after the incident happened, his wife, Ebere had been in the hospital with his surviving daughter, Chidimma.

“She is still in the hospital with her mother. When they got to the hospital that day, the doctor insisted on police report and deposit before treatment could commence on my six-year-old daughter. We went to the police station for the report, but the policemen were dribbling us and kept us waiting for almost one hour while the little girl was still bleeding. It was until my brother’s wife shouted like a madwoman that one of them attended to us. Police will never change,” he said.

While narrating how the killing took place, Ebere Idamatam, the mother of the deceased boy said; “On Wednesday, February 3, 2021, at about 3 pm, I just brought my two children from school and we all returned back to the market where I was selling groundnuts. After having their afternoon meals, we suddenly started hearing gunshots with some people running towards my shop. Immediately, I heard my daughter cry in agony with blood gushing from her left hand and chest. While I went for her, Chukwueloka, my son had already fallen on the floor with blood gushing out from his stomach. I was temporarily out of my mind as I didn’t know what to do at that point. It was when the whole chaos died down that some people took me to the hospital with my daughter to save her life. My brother, we have been in this hospital since that day trying to save my daughter. I thank God they have been able to remove the bullets from her body.”

She disclosed that family members had been of immense support to her family in offsetting the hospital bills.

She still appealed for more assistance from good spirited individuals to help them pay off the hospital bills.