Police officers have been seen on video beating residents of Aba in Abia state with a machete. 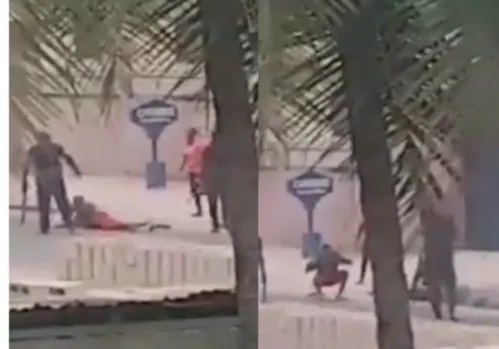 Police officers flogging Aba residents with machete
Officers of the Nigeria police have been caught on video brutally flogging a man in Aba, Abia state with a machete.
A Nigerian, Harrison took to his Twitter handle, @harrisonmbamara to share the shocking video.
In the video, four police officers were seen forcing an unknown man and woman to do frog jump in a quiet street. All of a sudden, the man was forced to lie on the road as the police officers used machete on him.
The officers could be heard, from the clip, shouting at their victims who appeared helpless.
It is unclear why the two were being punished.
But from the voices from the background, from the people who were doing the secret recording, it appeared the assault was linked to the Tuesday attack on a police station in the city.
Meanwhile, the Abia State Government, through its Commissioner for Information, John Kalu, has also reacted to the video.
“While we sympathise with the Police over the cowardly attack by yet to be identified hoodlums, we will not tolerate acts of brutality against innocent Abians and residents.
“The state government will investigate the authenticity of the video with a view to punishing whoever is found to have unleashed brutality on innocent citizens.
“We call on the police not to succumb to the temptation to engage in knee jerk response but to painstakingly identify the culprits and bring them to justice,” Mr Kalu told Premium Times, Tuesday.
Nigeria’s human rights record has continued to deteriorate, despite more than two decades of democratic rule.
Citizens, frequently brutalised by security officers, hardly get justice because of Nigeria’s poor criminal justice system.
Nigerians have taken to social media to react to the video.
“This kind of video is enough to start an Uprising. Whatsoever the offence, police has no Right to attack the people they are meant to protect. Why is the country sleeping?” One Iphi Josh wrote.
“Why can’t you guys mobilize people and ask them what’s going on???” One real moris wrote.
One Obua Uchenna wrote; “pathetic country, one of the victims looks like a female, how horrible. this is what the citizens face daily as nigerians”
One Che Nweze wrote; “What da f**k is going on there at the back of the Police Station, these policemen are the sons of the devil.”
Watch the video below: