The suspect was arrested for allegedly being part of a package delivery criminal organization that fraudulently receives cash deposits from unsuspecting victims, particularly women. 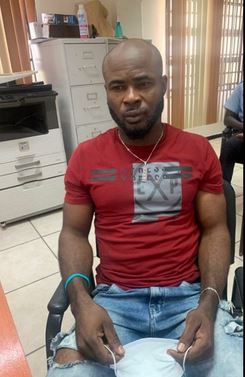 Uche Raymond Okoye, a Nigerian national who is allegedly part of an international criminal network in which women are befriended on Facebook and promised expensive gifts and jewellery, was arraigned in court on Wednesday, February 24, and slapped with an additional 11 fraud-related charge.

According to the charges, Okoye, who made a virtual appearance before Chief Magistrate Ann McLennan, had between October 15, 2020, to November 16, 2020, with intent to defraud, obtained from Suruj Dei Balkaran the sum of $6,059,900, by falsely claiming he had packages intended to be sent to her.

He was also slapped with a similar charge which stated that he obtained $50,000 from another woman by falsely claiming he had a package to be sent to her.

Okoye was not required to plead to the indictable charges after they were read to him by the Magistrate. He was remanded to prison since he has no ties to Guyana. He will make his next court appearance on March 17, 2021, for reports.

The reports said that Okoye is suspected to be part of a criminal network involving Nigerian nationals who collaborate with other associates to solicit cash from their victims by promising high-valued merchandise following the payment of a charge or fee.

The Special Organised Crime Unit (SOCU) Prosecutor told the court that Okoye allegedly solicited funds from the women after he befriended them on Facebook under an alias name.

During that time, he informed them about the supposed packages containing the latest gadgets and electronic devices. He reportedly told the women that he would be sending the items and that they would need to contact a representative who would clear the packages and deliver them. The representative he refers to is himself, the SOCU prosecutor added.

According to the prosecutor, the Nigerian national sent the women a Whatsapp number which he could be contacted on about the transactions. It is alleged that the women paid the monies expecting the packages but every time Balkarran was told of some complications and was instructed to send more cash via bank transfers and Western Union. She reportedly sent monies on 10 different occasions.

On November 24, last year, Okoye was charged with two counts of obtaining money by false pretence; demanding money by menace; and entering Guyana by crossing the land frontier and failing to present himself to an immigration officer.

The Guyana Police Force (GPF) said that Okoye is part of a  criminal organisation that has allegedly scammed unsuspecting Guyanese victims out of millions of dollars.

The Police said that the criminal network operating in Guyana has links to the United States of America, the United Kingdom, Peru, Brazil, Venezuela, Argentina, Paraguay, and other countries.

According to the police, the perpetrators would send a Facebook friend request to the intended victims, particularly women, and seek communication via WhatsApp. Police informed that the mastermind who is residing overseas, would express a romantic interest in the women and would later tell them he would be sending gifts and jewellery.

The women would later receive a call from someone purporting to be employed at a shipping company about a box arriving at the airport for them. At this point, the Police said that the women would be instructed to pay various sums of money to several individuals to uplift the boxes and to avoid prosecution.

The GPF has warned citizens, especially women about a scam involving persons pretending to be of Nigerian nationality who will make contact through Facebook and Whatsapp and offer to send them packages.

Police said that the perpetrators would demand that victims pay a large sum of cash to clear the packages and to prevent prosecution given the contents of the packages.