The Nation gathered policemen on duty fled as the hoodlums who were mobile carried out the arson on the facility. 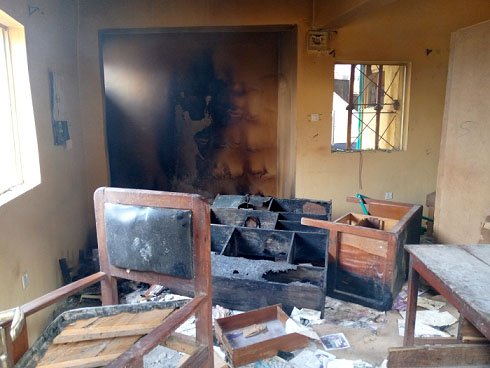 It was panic that took over in Imo state Thursday night as hoodlums set the Aboh Mbaise Divisional Police Headquarters ablaze, The Nation reports.

The Nation gathered policemen on duty fled as the hoodlums who were mobile carried out the arson on the facility.

On arrival, the hoodlums who, according to sources were carrying inflammable objects, threw them at the police formation and ignited the environment.

The development caused panic in the area, as the policemen on guard, suspects and residents ran into nearby bushes.

Investigation revealed that though no riffle was lost in the incident, some policemen and suspects sustained minor injuries.

It was gathered that all the files and documents belonging to the police were lost in the inferno.

The Nation learnt the attackers did not bother gaining access into the police facility as they fled after throwing canons at the police formation and watched it razed.

The police spokesperson for the state command, Orlando Ikeokwu, confirmed the attack when contacted by The Nation.

Wow! Couple Remarries After Over 10 Years Of Separation And Divorce (Video)
Popular Stories