Her husband James, an IT director for the airline, was gunned down while the couple were out on a morning walk with their dog in their Dallas neighborhood. 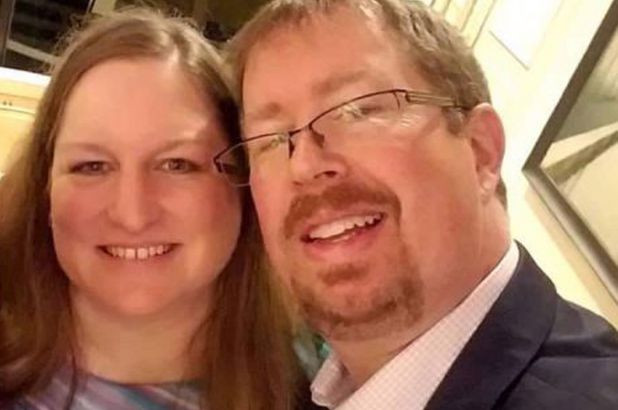 The woman and her late husband

Jennifer Lynne Faith, the wife of an American Airlines executive who shot dead in Texas has been accused of dating her late husband's alleged killer.

The woman is reported to have played the grieving widow on TV — only for cops to discover she was allegedly having “a full-blown emotional affair” with his accused killer, authorities said Thursday.

Jennifer Lynne Faith, 48, was hit Wednesday with federal obstruction of justice charges in the Oct. 9, 2020, death of her 49-year-old hubby James “Jamie” Faith, according to the Department of Justice.

Federal prosecutors charge that she communicated with the alleged gunman, her high school sweetheart, and pushed him to get rid of evidence — all while publicly pleading for information about the case.

Her husband James, an IT director for the airline, was gunned down while the couple were out on a morning walk with their dog in their Dallas neighborhood.

“I heard running behind me, and I turned around and all of a sudden somebody just started shooting at him,” Jennifer told local outlet NBCDFW in December.

She pleaded for anyone with information about the case to come forward.

“My hope is that someday perhaps the person will realize the gravity of what they’ve done,” she said. “He was just the backbone of our family. It was just devastating.”

Investigators on Jan. 11 arrested Darrin Ruben Lopez, a 48-year-old Tennessee man, and charged him with the fatal shooting.

He and Jennifer had dated in high school and college, according to an arrest warrant affidavit.

Authorities said that Lopez allegedly drove from Tennessee to Dallas and laid in wait for the couple before shooting James seven times and fleeing the scene.

Cops discovered that between Sept. 30 and Oct. 30, 2020, Lopez and his victim’s wife exchanged some 14,363 calls and texts the affidavit states.

While being questioned by detectives in January, Jennifer allegedly admitted that she communicated daily with Lopez, though denied an intimate relationship, authorities said.

But investigators seized Lopez’s cellphone after his arrest and discovered the pair were actually “intimately involved,” according to prosecutors.

Their texts allegedly revealed how Jennifer would update her beau on her efforts to cash in on James’ life insurance policy, and how she coached him to respond to potential police questioning.

“If asked about you, you are an old friend going through a divorce… If it ever comes to it, I’ll answer the same way,” she allegedly wrote, according to court documents.

“Just so you and I have the same explanations. Just thinking in case they [law enforcement] pulled phone records and asked,” the texts added.

She also allegedly instructed Lopez to get rid of a “T” decal on the back window of his truck — identical to the one witnesses had reported seeing on the shooter’s pickup, prosecutors said.

Investigators said that Jennifer allegedly wiped her phone, but they were able to recover her texts with Lopez.

She was arrested at her Oak Cliff home on Wednesday and was expected to appear before a judge on Friday.

“Even as she publicly claimed she was ‘desperate for answers’ regarding her husband’s murder, Jennifer Faith was communicating with the alleged killer, actively urging him to destroy evidence and attempting to delete incriminating communications from her phone,” US Attorney Prerak Shah said in a statement.

“Thanks to the dedication of our agents and officers, Ms. Faith could not keep law enforcement from identifying her husband’s killer.”

Her defense attorney, Toby Shook, said he couldn’t comment on the arrest, according to local reports. He has told WFAA-TV that his client is innocent and is fully cooperating.