Policemen in Ogun state have apprehended two men who took turns to sleep with a co-tenant in Ogun. 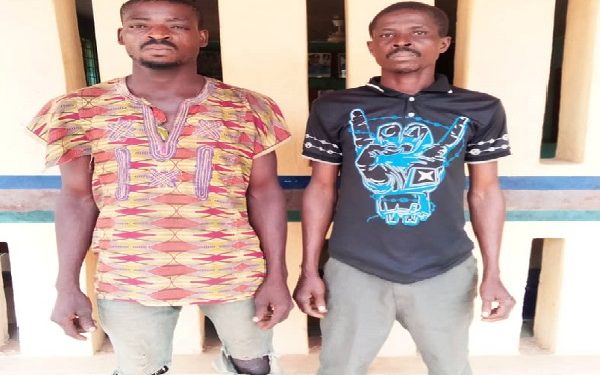 The two men after being arrested
Two men identified as Anthony John, 35, and Jimoh Idowu, 21 have been arrested by the police in Ogun state.
The duo were arrested for gang-raping their female co-tenant.
The suspects allegedly broke into the room of the female tenant around 2:00am on February 26, used fabric to gag her mouth before dragging her into one of the suspects’ (Anthony) room, where she was gang-raped.
Curiously, the suspects without sign of remorse, admitted they gang-raped the victim.
However, the girl reported the incident at the Owode-Egba divisional headquarters that the suspects cashed in on the fact that she was at home at the time with her younger sibling when their father travelled.
According to the victim, she lives in the same house in Efunye village via Owode-Egba, with the two suspects.
The Police Public Relations Officer, Abimbola Oyeyemi, who disclosed this in a release, said the Divisional Police Officer for Owode- Egba Division, Ediae Mathew mobilised detectives to the scene and arrested the two suspects.
Abimbola, a Deputy Superintendent of Police (DSP), said the victim had been taken to Owode-Egba general hospital for treatment while the suspects will be transferred to anti-human trafficking and child labour unit for further investigation and prosecution as directed by the Commissioner of Police, Edward Ajogun.
Top Stories