The Nigerian Labour Congress has announced the commencement of a nationwide strike today. 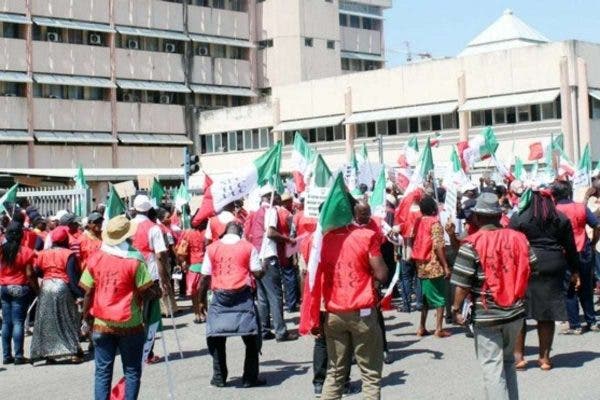 NLC
The Nigeria Labour Congress (NLC) and its allied unions have given details concerning the commencement of a nationwide strike.
According to the organized labour, the National Assembly is set to remove the Minimum Wage from the Exclusive List to the Concurrent List.
A statement from the NLC headquarters, Abuja, on Tuesday stated that the mobilization for the Wednesday demonstration will start from the Unity Fountain in the FCT to the National Assembly complex, Vanguard reports.
NLC Chairman in Ebonyi State, Ikechukwu Nwafor, confirmed this to NAN, on Tuesday in Abakaliki, the state capital.
Nwafor also urged the National Assembly to stop playing politics with the N30,000 minimum wage.
He said: “You all know that the issue of the minimum wage has been a big issue in this country, but this is a situation that has been taken care of by the law of this country through the minimum wage act.
“It is very unfortunate that up till now, so many states are yet to implement the N30, 000 for workers; some have paid fake wages like peanuts to its workers.
“So, the issue on the ground now is the bill sponsored in the national assembly requesting the removal of minimum wage from the exclusive list. We are going out tomorrow, being Wednesday, to say that such a move to remove it is not obtainable.
“Minimum wage is the right of workers and should not be politicised as established by law. If the national assembly does that, what will the fate of workers be?
“We are going out to tell the whole world that we are against any bill to remove workers’ salary from the exclusive list.
“Politicising minimum wage is a crime against workers’ wellbeing and a crime against humanity.”
Top Stories