Some Corps Members Who Finished 10 Years Ago Yet To Be Employed, Says NYSC


The NYSC Director-General, Brig Gen Shuaibu Ibrahim, stated this on Wednesday, noting that the lack of jobs for ex-corps members was worrisome to the scheme. 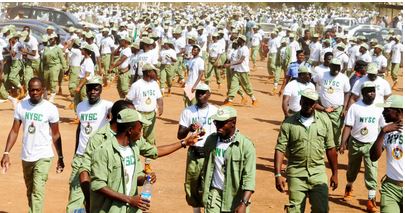 Corps members have been urged by the National Youth Service Corps to take entrepreneurial skills with all seriousness, noting that some corps members who passed out as far back as 10 years ago have not yet been gainfully employed.

The NYSC Director-General, Brig Gen Shuaibu Ibrahim, stated this on Wednesday, noting that the lack of jobs for ex-corps members was worrisome to the scheme, but it would continue to intensify the Skill Acquisition and Entrepreneurship Development programme to bridge the unemployment gap.

The DG noted that the corps members would be employers of labour, rather than “an army of restive job seekers, trudging the streets of Nigeria in search of scarcely available white collar jobs.”

Ibrahim, in his address to the corps members who began orientation camps today nationwide, also pleaded with them not to embark on unauthorised journeys.

The DG said, “NYSC in the last few years recorded a paradigm shift in the orientation course content, aligning it with the prevailing security and economic realities. The precarious state of national security and shrinkage of white-collar jobs made this phenomenal change germane and compelling.

“This shift witnessed the introduction of Martial Arts training into the course content so as to equip corps members with basic self defence skills. That notwithstanding, the scheme is always in constant touch with the various security agencies to ensure that your security is not compromised.

“A corollary to the above is the issue of financial security. It is quite worrisome to note that a lot of ex-corps members who got discharged from service as far back as 10 years are yet to be gainfully employed. This sorry state of affairs has brought about despondency and dejection on the part of some serving corps members.

“It equally fans the embers of criminality and depravity such as robbery, advance fee fraud, prostitution, drug peddling and abuse to mention but a few.

“In an attempt to stem this tide, the scheme introduced Skill Acquisition and Entrepreneurship Development programme into the orientation course content. Prior to this intervention, the scheme had been in collaboration with the National Directorate of Employment, the Central Bank of Nigeria as well as Office of the Senior Special Assistant to the President on MDGs, now SDGs.”