Chikwendu had made the allegations in an affidavit she deposed to in support of an originating motion brought pursuant to Section 69 of the Child’s Rights Act, 2003. 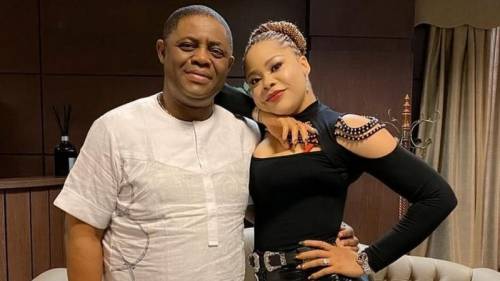 Precious Chikwendu, a former beauty pageant, who is the ex-wife of former Minister of Aviation, Femi Fani-Kayode, as well as her lawyer are set to be interrogated by the police in the Federal Capital Territory, Abuja over allegations of forging court papers.

SaharaReporters learnt that the police gave her and her lawyer 10am on Thursday (today).

Sources noted that Fani-Kayode, who is in court with Chikwendu mainly over who takes custody of their four children and other sundry allegations, is believed to be using the police authorities and their interrogation to harass the former beauty pageant as the case was already in court.

Last Friday, Chikwendu had explained before a FCT High Court in Apo, Abuja, that Fani-Kayode, her ex-husband beat her up on several occasions even while she was pregnant.

She had, therefore, demanded full custody of their four sons aged five and three.

Chikwendu had made the allegations in an affidavit she deposed to in support of an originating motion brought pursuant to Section 69 of the Child’s Rights Act, 2003.

The case was presided over by Justice S.C. Oriji of the FCT High Court.

Fani-Kayode had fired back the following day in a release by his aide, that Ckiwendu had mental issues and once cut two people with knives while trying to kill him and their four children.

The former minister, in replying to Chikwendu, added that he never denied the woman the right to see her children nor come to the house.

Sources told SaharaReporters on Thursday that Fani-Kayode had called for police invitation and the grilling of his former wife over allegations of forged court papers.

“They have a court session on Friday but Femi (Fani-Kayode) ambushed them. He is using the police on her; accusing them of forging court papers. They were given 10am on Thursday. The police invited the wife, her lawyer and the court bailiff,” a source revealed.

Before the court last Friday, Chikwendu had narrated, “From the early days of our relationship, the respondent (Fani-Kayode) has always maintained a lifestyle of utter disregard to my feelings. This was evident in the way and manner the respondent assaulted me while I was pregnant with our first son.

“The respondent (Fani-Kayode) kicked me several times on my stomach over a petty argument that ensued. It was my friend, Vanessa, who was around at the material time that intervened at the nick of time to save me.

“I had to leave the respondent’s (Fani-Kayode’s) house a few days after this incident. The respondent (Fani-Kayode) repeated the same act when I was pregnant with triplets, this time it was my mother and sister, Faith, that intervened.”

Chikwendu had added that on one occasion, Fani-Kayode and a former Divisional Police Officer of the Asokoro Police Station drugged her.

She said the ex-minister and her soon became companions and began living together. She, however, said things soon turned sour as Fani-Kayode began exhibiting signs of paranoia.

But in a release through his media consultant, Oladimeji Olaiya, the following day, Fani-Kayode noted that Chikwendu was “unfit to be a mother and that she has shown nothing but cruelty to her children whom she has never taken care of or shown the love and affection of a mother.”

“Chikwendu's only pastime was to post pictures and words on Instagram and sleep with men outside. She also tried to seduce a number of Chief Fani-Kayode's friends when he was in detention and extort money from them.

“On one occasion, she cut two people with a knife and almost bit off the finger of a third when she was trying to attack and kill her own children and husband with two knives. Thirty people witnessed this and we have it on video,” the release had partly stated.