Nigeria's National Security Adviser has stated that money meant for the purchase of arms given to Buratai and other past service chiefs is missing. 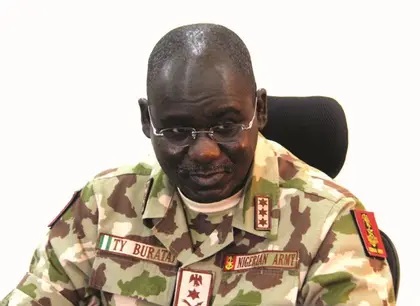 Ex-Chief of Army staff, Buratai
Money given to ex-chief of army staff, Tukur Buratai and other service chiefs by President Muhammadu Buhari for the purchase of arms is missing.
The revelation was made by the National Security Adviser, NSA Babagana Monguno, according to a report by DailyNigerian.
On January 26, President Muhammadu Buhari removed the service chiefs in persons of  the Chief of Defence Staff, General Abayomi Olonisakin; Chief of Army Staff, Lt-Gen. Tukur Buratai; Chief of Naval Staff, Vice Admiral Ibok Ekwe Ibas; and Chief of Air Staff, Air Marshal Sadique Abubakar
The president had immediately appointed their replacements in persons of Major-General Leo Irabor, Chief of Defence Staff; Major-General I. Attahiru, Chief of Army Staff; Rear Admiral A. Z. Gambo, Chief of Naval Staff; and Air-Vice Marshal I.O Amao, Chief of Air Staff.
But in an interview with the BBC Hausa on Friday morning, the NSA said neither the money approved by Mr Buhari for arm purchase nor arms was met on ground when the new service chiefs assumed office.
Asked why the government is foot-dragging on fight against banditry, Mr Monguno said the president had done his best by approving huge amount of money for arm purchase but the equipment was not forthcoming.
“Now that he (President Buhari) has brought new people (service chiefs), hopely they will device some ways… I’m not saying the former service chiefs diverted the money, but the money is missing. We don’t know how, and nobody knows for now,” he said.
Asked whether the matter is investigated to trace the funds or the military hardwares, the NSA said the president would investigate the matter.
“The President will surely probe this matter. As we speak, the Nigerian Governors’ Forum too is also wondering where all the money went. I can assure you the president takes issues of this nature seriously.
“The fact is that preliminary investigation showed the funds are missing and the equipment is nowhere to be found.
“When the new service chiefs assumed office, they also said they did see anything on ground,” he said
Top Stories