Notorious Boko Haram and ISWAP terrorists alongside their gun trucks have been destroyed by the military. 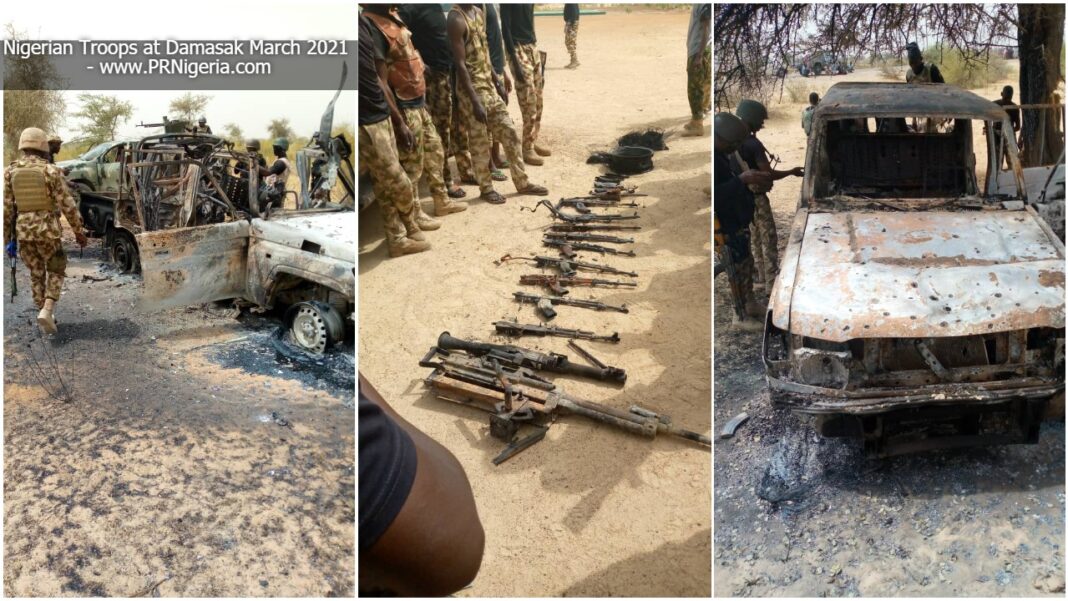 Boko Haram terrorists destroyed in Borno
The Nigerian military recorded tremendous success over the weekend after destroying dozens of ISWAP/Boko Haram terrorists at Damasak, the headquarters of Mobbar Local Government Area of Borno State.
It was gathered that the task was made possible through aerial bombardments executed by Nigerian Air Force, NAF Fighter Helicopters.
PRNigeria gathered that the armed terrorists with sophisticated ammunition stormed Damasak town on Sunday in gun trucks to attack residents.
Their attempt to attack residents of the town were however foiled by the swift response of NAF helicopters, deployed to engage the Boko Haram elements.
A military intelligence officer, who craved anonymity, said the aerial bombardments of the NAF fighter aircraft eliminated over a dozen of the terrorists, and also shattered their gun trucks ‘terribly’.
He said: “Aside the air raids by the NAF helicopters, the ground troops also succeeded in neutralizing the remaining insurgents who attempted to escape after the destruction of three guntrucks, and one Canter Truck.
“The latest well-coordinated joint air and ground operations is quite encouraging as we have so far counted more than 30 dismembered corpses of the terrorists.”
PRNigeria gathered that the ground troops, led by Lt. Col Steven Nammu of 195 Battalion Super Camp in Damasak, recovered sophisticated weapons including AK-47 rifles, rocket-propelled grenades (RPGs), and other lethal arms, from the insurgents.
Top Stories