The officers were reportedly killed by hoodlums in different areas of the state while their patrol vehicle was burnt. 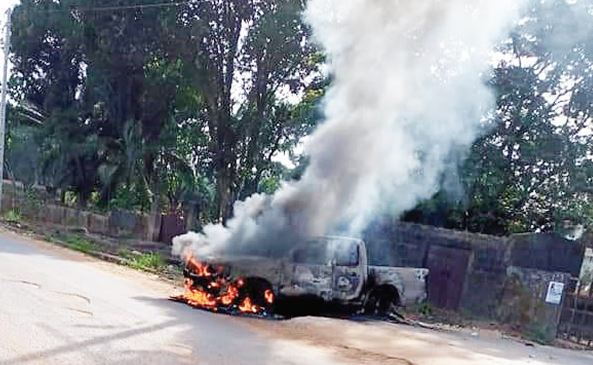 Four naval officers and three policemen were reportedly killed by gunmen on Thursday in Anambra State.

But the state police command said it lost only one cop.

Punch Metro gathered that the incident created tension in the state as the security agents were ambushed and murdered.

Punch learnt that the hoodlums killed three policemen at Ukacha Junction, Neni, in the Anaocha Local Government Area of the state, while their patrol vehicle was burnt.

The four naval men were reportedly killed at Awkuzu, in the Oyi LGA of the state.

A source said, “The gunmen rampaged Awkuzu Junction and killed the naval officers on duty and carted away their firearms. The four naval men were on duty at the junction when the hoodlums attacked them around 2pm.

“A similar thing happened moments ago at Neni, just before Oraukwu. Police officers were killed and their weapons were taken from them. Their vehicle was also set ablaze.”

The state Police Public Relations Officer, DSP Ikenga Tochukwu, confirmed the attack on the policemen, but said only one person died.

He said, “The hoodlums, numbering over 20 in three Sienna vehicles and motorcycles, engaged the policemen in a gun duel, which lasted for over 30 minutes before reinforcements from the state headquarters forced the hoodlums to escape.

“As a result, two police operatives sustained gunshot injuries and were rushed to a hospital for medical attention, where one was confirmed dead.”

Naval authorities could not be reached for comment as of the time of filing this report.