Operatives of the EFCC have arrested and arraigned three men who gave fake information to them. 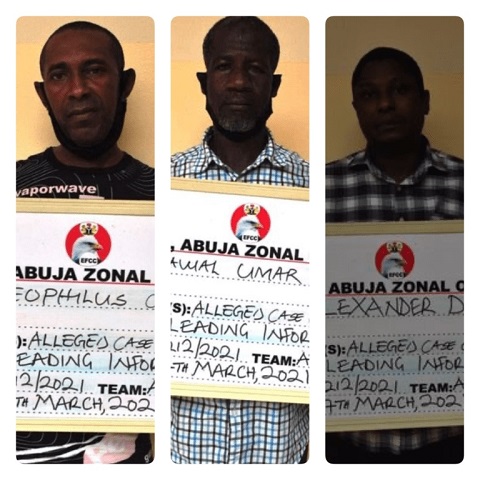 Fake whistle blowers
Three men who gave false information to the Economic and Financial Crimes Commission, EFCC have been arrested and arraigned.
The men are: Theophilus Omambala, Lawal Umar and Alexander Danjuma. They were arraigned before the Federal Capital Territory High Court, Bwari, Abuja over fake whistleblowing.
The EFCC Head of Media and Publicity, Wilson Uwujaren who disclosed this in a statement issued on Friday said the suspects were arraigned before Justice Musa Usman.
Mr Uwujaren revealed that the defendants who pleaded not guilty where charged on a one count charge bordering on false and misleading information.
The charge reads: “That you Theophilus Omambala sometime in 2021 at Abuja within the jurisdiction of this Honorable Court, gave information to officers of the Economic and Financial Crimes Commission that monies were stashed at the residence of one Audu Innocent Ogbeh located at Lugbe District of the FCT, which turned out to be false, untrue and misleading and thereby committed an offence punishable under Section 39(2) (b) of the Economic and Financial Crimes Commission Establishment Act (2004)”.
According to the spokesman, the prosecuting counsel, Aliyu Bokani-Usman in view of the plea asked the Court for a trial date and that the defendants be remanded at the Nigerian Correctional Centre in Kuje.
He said: “Counsel to the defendants, A.I. Na-jirgi prayed the Court to grant his clients bail.
“The judge rejected his oral application insisting on a formal bail application which should be filed before the next adjourned date.
“The defendants have been remanded in the Kuje Custodial Centre pending determination of bail application and the case has been adjourned till June 21, 2021,” he added.
Top Stories