I Picked Abaribe From The Gutter - Orji Uzor-Kalu


Kalu stated that he picked Abaribe from the gutter and he is little-minded to think he is ashamed of his prison experience. 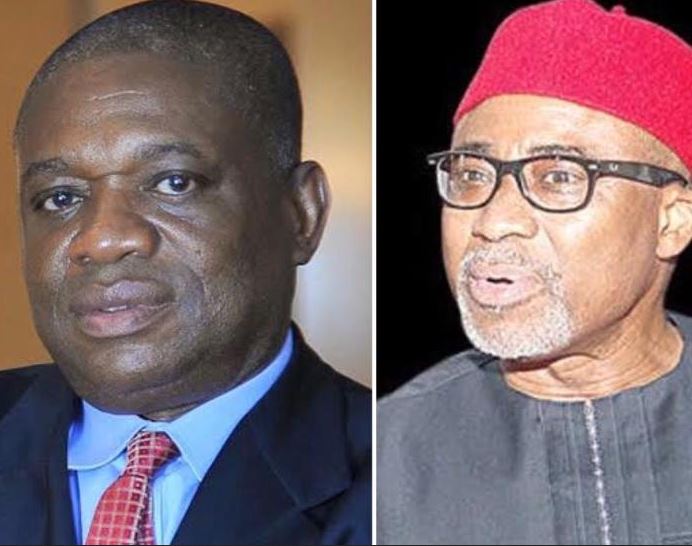 A former governor of Abia state, Orji Uzor-Kalu has dragged Senator Enyinnaya Abaribe  for saying he was impeached for not joining the group of Egusi peelers.

Abaribe was the deputy governor when Kalu governed Abia in 1999 but he was impeached before the end of Kalu’s first term.

The Senator representing Abia South had alleged in his book titled  “Made in Aba”, that he was impeached because he failed to join the league of “Egusi peelers that thronged Kalu's mother’s abode for whatever reason”.

“I lasted exactly three years and nine months in office, before I threw in the towel. The bumpy ride ended on 7th March, 2003, when I finally resigned and switched parties.

“The one tenure was characterised by three attempts at impeachment. The one thread that runs through them all is that government can make no error.”

Also speaking in the buildup to Saturday’s bye-election in Aba North and Aba South Federal Constituency, Abaribe said Kalu who has been campaigning for his younger brother who is the All Progressives Congress (APC) candidate in the election, is yet to recover from Kuje prison experience and may find it difficult to understand the new changes in Abia.

Reacting to this, Kalu stated that he picked Abaribe from the gutter and he is little-minded to think he is ashamed of his prison experience.

“ I picked Abaribe from the gutter. My conspirators thought I would be President in 2023, so they decided to cut my journey short at all cost. Abaribe continued to supply petitions. But you see, these people are not God.

“They think I am ashamed to have gone to prison. I am not and I don’t blame them because they don’t know my relationship with God… Joseph went to Prison, even Obasanjo went to prison. My going to prison is part of my life script and I am thankful God allowed it.

“They are little minds and wicked people who have refused to do any project for their own people. They have kept a centre table for you and called it bridge.

“You can’t even pay common salaries and you are here swearing to God, ‘na me build this road’. The only road the state is constructing is the 600 meters road in Eziukwu which they have been building in the last six years; that’s one year 100 meters.

“Compare my village and these people’s village and you will see how shameless they are. If you can’t build your own village, is it my own you will build?”