Kcee and his brother E-money may have landed in trouble after being sued by a popular catholic composer. 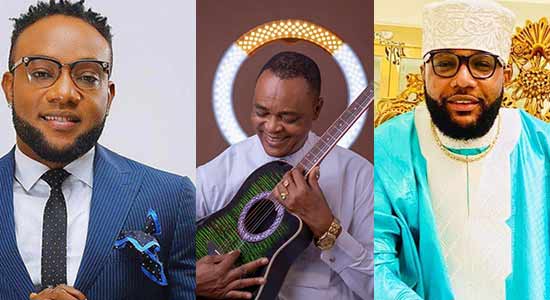 Kcee, Jude Nnam and E-money
Nigerian musician, Kcee and his brother, E-money have been dragged to court by a prominent Catholic music composer, Sir Jude Nnam.
Nnam sued the duo for alleged Copyright infringement.
Their music label, Five Star Music is also a Defendants in the suit.
Nnam is seeking “A DECLARATION that the copyright, as well as the ownership rights to the song titled ‘SOM TOO CHUKWU’ which was surreptitiously included in the music album titled “CULTURAL PRAISE VOL.1 by the 3rd Defendant without the Plaintiff’s consent or authorization, is vested in the Plaintiff by Virtue of his composing the said song in the year 2001.
It would be recalled that Kcee released an Okwesili Eze Group-assisted single titled ‘Cultural Praise Vol 1’ in December 2020 while a sequel was put out in January 2021.
Jude Nnam had, however, in the suit alleged that Kcee copied his lyrics for the song.
A check on Kcee’s previous singles revealed ‘Som Too Chukwu’ was a quantum leap in his streaming figures.
There are insinuations that Kcee was approached by Nnam in January before the release of the song’s sequel.
Mr. Jude wants the court to compel the defendants to jointly and severally render an account of the profits, income, and benefits generated from the adaptation, production, distribution, sale, advertisement, marketing, and performance of the titled “SOM TOO CHUKWU” from December 2020 till judgment and the sum of N150,000,000 as general damages.
Top Stories