At least 7 Boko Haram terrorists have been killed while planting IEDs near Sambisa forest. 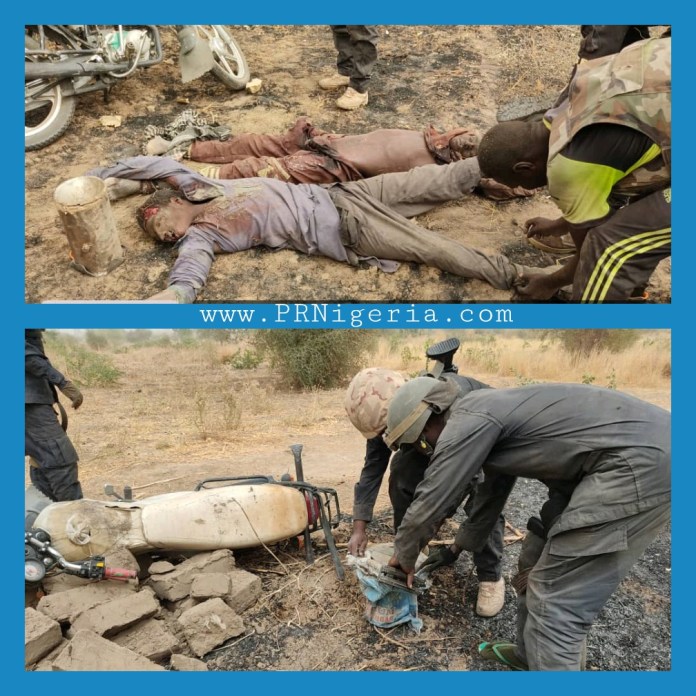 Boko Haram terrorists killed near Sambisa forest
Seven Boko Haram terrorists are dead.
The terrorists were killed by Nigerian troops under Sector 1 Operation LAFIYA DOLE along Njimia Alafa, near Sambisa Forest, Borno State.
The Commanding Officer of the 21 Special Armoured Brigade, Bama, Waidi Shayibu, led the operation.
According to a report by the PRNigeria, the insurgents were eliminated while planting several Improvised Explosive Devices, IEDs, along the route of military clearance operations.
An intelligence officer involved in the operation told the newspaper that only few terrorists escaped with gunshot injuries.
He said: “In a current tradition of well-coordinated joint air and ground operation, the troops had received actionable intelligence and activities of the terrorists on some of the routes.
“When the last signal was received, our troops laid ambush on the terrorists along the routes after sighting them and neutralised them.
“We have recovered seven bodies of the terrorists, their AK 47 rifles, Anti-Aircraft gun and motorcycles.
“Some of the suspected IEDs found on the road were destroyed by the Army’s Bomb Disposal Units.”
Meanwhile, during his recent visit to Sambisa Forest, the Acting General Officer Commanding, 7 Division Nigerian Army and Commander, Sector 1 Operation Lafiya Dole, Adelokun Eyitayo, had advised the troops to be watchful and extra vigilant against insurgents ambushes.
Mr Eyitayo also urged the troops to remain very aggressive in all operations, while appreciating their doggedness and sacrifices for a safer nation.
“I know by the grace of God and by your commitment, we will succeed in this battle. I, therefore, urge you to do something before something do you. Don’t give the enemies the chance at all,” he concluded.
Top Stories