Nigerien soldiers have been arrested after staging a coup ahead of the swearing-in of the new president. 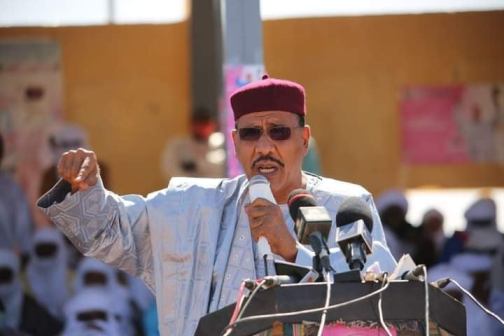 Aborted coup in Niger ahead of Swearing-in of Mohamed Bazoum
Soldiers who attempted to take over the government in the Republic of Niger have been arrested.
The aborted coup was stopped on Wednesday and many soldiers involved have been arrested.
The putsch staged by a military unit comes just two days before the country’s first ever peaceful transition of power.
President-elect Mohamed Bazoum is due to be sworn in on Friday — taking over from President Mahamadou Issoufou.
Residents of Niamey, the capital said there was “intense shooting, with heavy and light weapons,” from 3 a.m. local time.
The shooting around the presidential palace lasted about 30 minutes.
In videos posted on social media, the sound of short bursts of gunfire could be heard in the darkness.
Anonymous security sources told both AFP and Reuters that the situation was under control after assailants attempted to seize the palace.
The United States Embassy in Niamey issued a security alert saying it would not open its doors on Wednesday “due to gunshots heard near our neighbourhood.”
President-elect Bazoum defeated a former president Mahamane Ousmane, in the election run-off in February. But Ousmane alleged fraud.
Ousmane served as president for three years until a military coup toppled him in 1996. He has since tried to regain power, most recently through the February election.
Niger has had four coups since its independence from France in 1960.
The spread of deadly extremist violence has long plagued the West African country, with jihadi insurgencies spilled over from Mali and Nigeria.
Top Stories